Eco-friendly product should be an easy sell 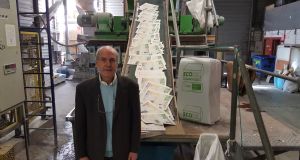 John Egan of Ecocel: the firm got a boost when he was interviewed by Duncan Stewart on RTÉ’s “Eco Eye”

Ecocel manufactures a cellulose fibre insulating product which is produced in Cork from recycled newspaper. It is fully certified by the National Standards Authority of Ireland and the Irish Agrément Board.

John Egan took over Ecocel in 2010, purchasing it from liquidators, and has spent the past number of years updating machinery and promoting the business. Two recent boosts for the company have been an appearance on RTÉ’s Eco Eye programme and a visit from Cork County Council which has agreed to offer Egan’s product as an option to those in council housing in the city.

The business was originally established in 2004 by Francis Thoma whom Egan met at a cellulose conference in England in the 1990s.

“Even when we inherited the machinery, it wasn’t in a great state. It took me a year to get the business up and running again,” Egan says.

The business was moved from Glanmire, outside the city, to one of the centrally-located former Ford buildings.

In 1968 the company was nationalised, and Egan’s parents returned home with the children (where the teenage John was boarding in Blackrock College). Egan’s father went on to work at Clondalkin Paper Mills.

“My inheritance came from paper so I thought I would invest it in paper,” he says. “At the time I didn’t want to put it into property and I had been in the cellulose business for a long time, having previously run an eco-building company called Healthbuild, which specialised in eco-friendly paints, cellulose insulation and radiant natural marble heaters.”

“Essentially people who are housed by Cork County Council have the option to choose my cellulose product whereas previously they could only opt for the standard roll-out insulation material,” he says.

Egan hopes to use this endorsement to promote his product with other county councils across the country. He believes the change of direction by the council points to a greater acceptance of Ecocel’s cellulose insulation as a mainstream product and of a drive towards the utilisation of more environment-friendly, local products.

“The main reaction to my appearance on Eco Eye was one of surprise,” he says. “People have been very supportive in terms of the recycling and eco-aspects of the product but also of the fringe benefits, which include enhanced air quality in the dwelling and enhanced fire-proofing.

“I want to educate people to the environmental benefits of Ecocel’s product. It’s made from recycled materials and is produced locally, which makes it a carbon-neutral product.”

Egan says that, as an environment-friendly alternative, Ecocel’s product is as cost-effective as the more commonly used fibre-glass-based insulation products. It also uses no heat or water in its production, making it a low-tech product.

“When you add in all the additional benefits for health and the environment, it is a definitely the better option for consumers,” he says.

The business has been entirely self-funded to date save for a €5,000 grant from Cork City Enterprise Board to test the viability of the use of the dust byproduct for use as a fertilising material. He also obtained a grant of €2,500 to upgrade his website which involved a substantial investment of his own.

The business is a labour of love for Egan for whom its eco-credentials are at the heart of his business philosophy. He believes the future looks bright as he builds his relationships with county councils and architectural firms. Future plans include the opening of local facilities around the country to keep the company’s carbon footprint low.

“It’s been stressful at time getting the building industry to recognise the benefits of the product,” he says. “But I know I made the right decision.” www.ecocel.ie