Dyson, the creator of bagless vacuum cleaners, has entered the beauty industry. Their Supersonic hairdryer has cost almost €65 million to develop, taken four years to perfect and and been tested on more than 1,625km of human hair. 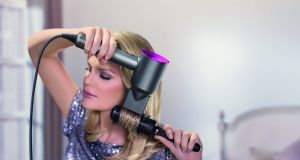 It has cost almost £50 million (€65 million) to develop, taken four years to perfect, gone through 600 prototypes and been tested on more than 1,625km of human hair, but Dyson has finally unveiled its latest product: the Supersonic hair dryer.

The company, which made its name creating bagless vacuum cleaners, has branched out in recent years, making fans and cleaners, hand dryers and taps. The Dyson Supersonic is the company’s first entry into the beauty industry.

The Supersonic is a smaller, more balanced dryer that uses Dyson’s compact motor technology which is eight-times faster than other hair-dryer motors and is only half the weight. The company built the motor into the handle instead of the head, where traditional hair dryers usually have their motors, and uses temperature controls to try to protect hair from heat damage.

Reports that Dyson was building a hair dryer surfaced as long ago as 2013, when patents filed by the company teased the existence of the “hairblade”, which was a quieter, lighter device.

More than 100 engineers worked on the device in the past four years, and it has generated more than 100 patents, currently pending, for the firm.

The Dyson Supersonic is set to go on sale in June for €399.

1 Belgium helps Ireland to a Brexit boon
2 ‘My rent here is so low it’s a joke’
3 This charming man: how Paschal Donohoe won the Eurogroup presidency
4 Can Grafton Street stop the flood of closures?
5 AIB to compensate another 1,100 tracker mortgage holders
6 New Powerscourt Springs hotel to open in defiance of virus gloom
7 ‘Sad day’ for House of Ireland as tourism retailer goes out of business
8 Examinership of Apple reseller Compu b confirmed
9 Goodbody’s planned €155m sale to Bank of China falls through
10 Government won’t name date for EV grants for car dealers
Real news has value SUBSCRIBE