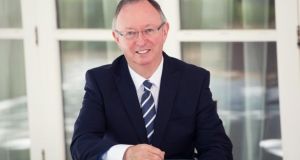 Portwest chief executive Harry Hughes. The firm is targeting €1 billion in turnover by 2025

Portwest, the speciality clothing company with headquarters in Co Mayo, has made a strategic investment in an Italian footwear company in a move that brings annual turnover for the group to over €300 million.

No financial details of the transaction have been disclosed although industry sources indicate the investment is worth just over €40 million.

Established in 2007, Base Protection footwear is one of Europe’s leading brands of safety footwear. It has annual turnover of more than €50 million and employs over 250 people. The company, which operates factories in Italy and Albania, is headquartered in Barletta about an hour north of Bari.

“This is Portwest’s first safety footwear investment and it fits well with the company strategy of offering our global customers a head to toe safety solution,” said chief executive Harry Hughes.

Founded by Charles Hughes in Westport in 1904, Portwest is one of the fastest growing workwear companies in the world. It specialises in fire-resistant and high-visibility workwear as well as personal protective equipment.

It employs more than 4,500 people globally, has sales in over 130 countries, warehousing facilities in Ireland, UK, Poland, Dubai, Australia and the US, and four fully-owned factories in Asia and Africa.

The family-run company is led by former EY Entrepreneur of the Year winner Harry Hughes and his brother Cathal and Owen.