Irish bankers to see the return of their bonuses 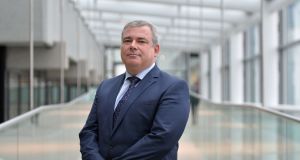 AIB chief executive Bernard Byrne, who will benefit from a new share scheme that has been devised by the bank. Photograph: Alan Betson

Bonus payments look to be on the way back for Irish bankers, a decade after the sector was bailed out by taxpayers. AIB on Thursday revealed that it plans to establish a deferred annual share scheme for key executives within the bank, starting in 2019.

The scheme will offer deferred shares in the bank each year up to the equivalent of 100 per cent of their salary. In the case of chief executive Bernard Byrne, this would be to the value of €500,000, the maximum he is allowed to earn under a Government salary cap.

The awards will be based on certain performance targets being met, while clawbacks have been built into the scheme in the event of failure. AIB’s executives will not be able to cash-in the shares until the State has received all of its €20.8 billion in bailout funds back – it has paid back €10.5 billion so far.

In response to a question from The Irish Times yesterday, Mr Byrne said it could be five or six years before the share awards could be exercised.

AIB said the share scheme would contribute to the retention of key executives by providing a “degree of visibility over awards and future payouts”.

The bank returned to the main stock markets in Dublin and London last year, with the State raising €3.4 billion as it reduced its stake to 71 per cent.

Bonuses for bank executives were prohibited by the Government after the sector crashed in late 2008.