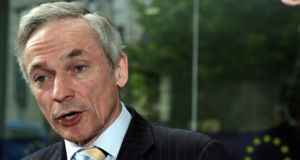 Minister for Jobs, Enterprise and Innovation Richard Bruton. Last year, the Irish Competition Authority approved the merger of Manwin and RK Netmedia; the Minister had the power to block the merger if he believed it was in the public interest to do so, but he did not act on this occasion. Photograph : Matt Kavanagh

The Manwin group, which operates hundreds of adult entertainment websites in Europe and the US, set up a holding company, billing business and a series of other entities in Dublin last year, shortly before it bought US rival, RK Netmedia.

Manwin’s founder, Fabian Thylmann, was arrested last December and extradited to Germany from his home in Belgium to face tax evasion charges which he denied.

He has since been bailed, but the authorities in the western city of Cologne are continuing with the investigation according to newspaper, Die Welt .

The inquiry is focused on claims the safeguards on some of its websites are not adequate to prevent children getting access to them.

The tax probe focuses on whether a website that generates €2.5 million a year – and which Manwin says is based in Cyprus – is actually controlled from Germany.

Die Welt has published a series of in-depth articles about Manwin and Mr Thylmann, who is notoriously publicity shy. The 34-year-old is from Aachen in western Germany.

The group is headquartered in Luxembourg and is one of the biggest operators in its industry, with revenues of over €100 million a year.


Incorporated in Ireland
Last year, the group incorporated companies in Ireland, including a holding company, Manwin Ireland Holdco and Manwin Content RK, which has the use of the copyright to thousands of adult movies produced in the States. It also set up a billing company and several other firms, some of which appear to be non-trading.

Last year, the Irish Competition Authority approved the merger of Manwin and RK Netmedia. It classed the deal as a media merger, meaning it had to be notified about it automatically. Minister for Jobs, Enterprise and Innovation Richard Bruton has the power to block any such mergers cleared by the authority if he believes it is in the public interest. He did not act on this occasion. None of the Irish companies are involved in the two investigations under way in Germany.