A polished solution to shining up cutlery in commercial kitchens

AirOPol is using air to take the effort out of polishing freshly-washed knives, forks and spoons 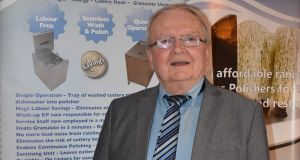 John O’Callaghan, who is about to launch his new venture, AirOPol. ‘Our machine is the only one on the global market using air,’ he says.

John O’Callaghan worked in the hospitality sector for 25 years before starting a catering equipment distribution company in his 50s. Twenty-something years later and he is about to launch a new venture. The business is called AirOPol and its product is an Irish-made, labour-saving cutlery polisher for commercial kitchens that innovatively uses air instead of vibration to do the job.

“Traditionally, cutlery had to be manually polished after it was washed and the process was tedious, boring and expensive,” says John O’Callaghan. “In the late 1990s, through my distribution business, I introduced the first commercial polishing machine into Ireland. It was a great improvement over hand-polishing but there were still some negatives. About four years ago, I decided to develop a new type of system that would address these issues and revolutionise the task by using air instead of vibration to polish the cutlery. Our machine is the only one on the global market using air.”

O’Callaghan designed the machine from scratch and it is being made in Galway. His competition comes from vibratory polishing machines, all of which are imported. In addition to reducing labour costs, the AirOPol also overcomes noise issues associated with vibration polishing and eliminates the risk of cutlery damage. The polishing cycle is also very short – just three minutes – which saves on energy while the polishing granules only need to be changed four times a year instead of 12.

The AirOPol went through four prototypes before O’Callaghan was happy with it and cost in the order of €50,000 to develop. This was self-funded. “I received invaluable help from Prof Tadhg O’Donovan, head of engineering at Heriot-Watt University in Edinburgh, and Dr David Kennedy, head of engineering at DIT Bolton Street who gave me great assistance to test and improve the product,” he says.

The AirOPol will be launched at this month’s CATEX catering exhibition and will be exhibited at three trade shows in UK and Europe this year. Global distributors will be appointed over the next 12 months. The company employs four people and this is expected to rise to 10 within three years. There are two other products in AirOPol’s portfolio, a glass polisher and a patented UV table heater which triggers when customers sit down and turns off when they leave.

“The AirOPol is very cost effective in terms of the purchase price and the ongoing savings compared to a vibratory machine,” says O’Callaghan who sees big opportunities for the machine in the UK post-Brexit. “The catering trade there is worried about having enough staff after Brexit so a machine that removes the need for labour-intensive hand polishing is going to be of considerable interest,” he says.

John O’Callaghan has always been open to new opportunities and it was this pioneering spirit that saw him join the New Frontiers programme for startups at DIT Hothouse, where he was the oldest participating entrepreneur by some margin. “Age didn’t come into it,” he says. “In fact, if I made a point, people tended to listen because I have been in business for a long time and they assumed I knew what I was talking about. From my point of view, mixing with younger people was very enjoyable and you get carried along by their vision and energy. I can’t speak highly enough of New Frontiers. I wish there had been something like this around when I was starting out. It provides so much relevant information that you can put to good use from the day you get it.”