How the beauty bias can work both ways for job-seekers

Being seen as attractive – and tall – can confer an advantage 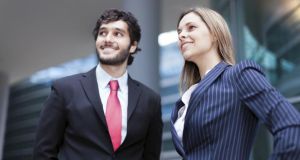 Unconscious bias exists within us all and often plays a key role in deciding if someone is hired, according to Clare Mulligan

Most of us are painfully aware of the advantages that good-looking people seem to enjoy. It’s not just sour grapes either. Increasingly, research is revealing just how beneficial it is to be beautiful when it comes to climbing the corporate ladder.

Research carried out by the US labour economist Daniel Hamermesh and included in his book Beauty Pays: Why Attractive People Are More Successful, shows good-looking professionals earn a total of $230,000 (€171,738) more than those with below-average looks over their working lives.

That’s not all. Mr Hamermesh, who is professor of economics at Royal Holloway, University of London, also found that attractive people are more likely to be employed, work more productively and profitably, receive better pay, find it easier to get loans and be likely to have better-looking and more highly educated spouses than others.

Perhaps not surprisingly, research also shows that being good-looking helps people to land jobs. A study published by Italian researchers at the University of Messina last year found that employers actively discriminate against unattractive job applicants.

Researchers from the university sent more than 1,100 fake CVs in for about 1,500 advertised job openings over the course of a year. They submitted the same CV eight times, changing only the name, address and photo of the applicant each time. The result? The better-looking the person was, the more likely it was they would be called for a job interview.

According to the study findings, the average call-back rate for all of the CVs submitted was 30 per cent. Attractive women were called back 54 per cent of the time, compared to just 7 per cent of those deemed to be unattractive.

This view is echoed by Michelle Hammond, a lecturer in organisational behaviour in the Department of Personnel and Employment Relations at University of Limerick.

“We tend to have a prototype in our mind much of the time about what a good employee or leader looks like and if someone matches that, then we’re more likely to think of them in a positive way, regardless of how they act,” she said.

“If someone is attractive, we will expect them to be competent, smart, funny and whatever else we value. We will pay much more attention to their positive traits than to any negative ones, and we’re more likely to give them a chance and rationalise any early failures we see,” Ms Hammond said.

The beauty bias comes into play, not just when we’re thinking of hiring someone, but also when it comes to firing him or her, according to Clare Mulligan, a Dublin-based organisational and business psychologist. She highlights research undertaken by Melissa Commisso (Rocky Valley College, Illinois) and Lisa Finkelstein (Northern Illinois University) in the US, that shows that an unattractive person up on a poor performance review is more likely to be picked for dismissal than someone seen as being better-looking.

She notes that a number of studies in the US have shown that when it comes to bosses, being tall is also an asset. One such study showed that while just 14 per cent of American men are over 6ft tall and less than 4 per cent are taller than 6ft, 2in, a staggering 36 per cent of corporate chief executives are over this height.

“We have to have biases because we need to make quick decisions sometimes, but we have to be careful when it comes into the workplace,” she said.

“It’s unlikely that you would not get a job solely because you are short or are not seen to be attractive, because there are plenty of other factors at play including level of experience and so on, but it can be an influencing factor. Recruiters have to learn to be aware of their unconscious preferences.”

As Ms Mulligan says, while being beautiful is generally a bonus, it can also work against you, particularly if you’re a woman. “Some people might think that some individuals are not suited to particular roles, such as blonde-haired women in high-profile corporate jobs or in engineering roles,” she said.

Ms Keating echoes this by pointing to a study by Ken Podratz of Rice University, Texas, who found that less attractive women were favoured for more masculine jobs such as a truck driver or security guard. Their good-looking counterparts were perceived as less capable of meeting the physical demands of the job.

Recruiters are tasked with making sure that bias doesn’t feature in the recruitment process while HR policies are there to ensure that employees are safeguarded from discrimination. As Ms Mulligan says though, specific laws outlining such discrimination are weak in many countries and people can be wary of proceeding with cases due to the publicity arising from them.

While the beauty bias may seem like a minor matter in the scheme of things, Ms Mulligan believes it is becoming increasingly important as our workforce becomes more diverse. On the positive side, she believes that younger people tend to be less biased than their older counterparts. She also thinks that with more people building connections online ahead of meeting in person, biases can be kept in check. “Generation Y is much more accepting of diversity generally which can only be a good thing for the workplace. Newer ways of working also mean that while we’re a society that is obsessed with looks, they will play less of a part in deciding whether you succeed or not,” she said.