UDG shares down 10% on weakness in contract sales division 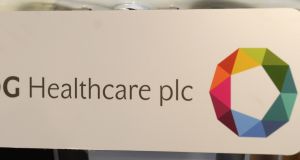 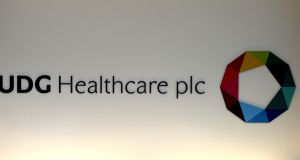 UDG Healthcare announced on Wednesday it had sold its Aquilant division to private-equity company H2 Equity Partners for up to €23 million. Photograph: David Sleator 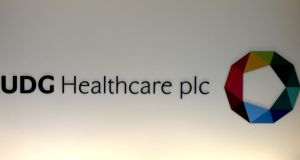 UDG Healthcare announced on Wednesday it had sold its Aquilant division to private-equity company H2 Equity Partners for up to €23 million. Photograph: David Sleator

Shares in service provider UDG Healthcare fell by more than 10 per cent on Wednesday after the group flagged weaknesses at its division responsible for contract sales and patient support services.

In a third-quarter trading update on Wednesday morning UDG said the commercial and clinical arm of its largest division “experienced a challenging quarter with operating profit well below the same quarter last year”. It cited the “phasing of contracts and fewer new business development opportunities” as factors causing the problems.

However the communications and advisory arm of Ashfield – which accounts for two-thirds of UDG’s profits – “performed strongly”, benefiting from acquisitions and underlying growth.

Its other division, Sharp, also encountered issues in its European arm with “a slower-than-anticipated ramp up in activity levels”. Although its US arm offset Europe’s performance.

Dublin-headquartered UDG also announced on Wednesday it had sold its Aquilant division to private-equity company H2 Equity Partners for a total potential net consideration of up to €23 million.

The total consideration comprises an initial cash payment of €20.5 million and a deferred payment of up to €2.5 million based on the achievement of gross profit targets by Aquilant both this year and next.

In its full-year results for 2017, Aquilant had been the group laggard with actual operating profit in the division falling on the back of adverse currency movements.

As a result, the group is taking an impairment charge of about $34 million (€29.27 million) “relating to the recognition of accumulated foreign exchange losses held in equity”. Additionally, UDG will recognise a $10 million impairment charge on the asset value of Aquilant.

Aquilant was the smallest of UDG’s three divisions and in its trading update the company said it was trading “well behind” the same period last year due to contract losses. The division which distributes products and services including sales and marketing represented about 4 per cent of the company’s operating profits for the six months to the end of March.

The sale of the Aquilant business forms part of the group’s strategy to exit its lower-margin distribution business, having sold the United Drug supply chain business to McKesson in April 2016.

London-listed UDG employs more than 8,500 people across its operations in 25 countries. Its Ashfield division, which represents more than two-thirds of the group’s profits, specialises in pharmaceutical and healthcare communication services while Sharp is active in commercial packaging and clinical trial packaging services. Its shares closed 10.37 per cent lower at 734.5p.

Acquisitions in 2017 have helped the group to grow revenue and pretax profit and the company said its balance sheet “remains strong”, reiterating its full-year guidance for earnings per share growth between 18 per cent and 21 per cent head of last year.