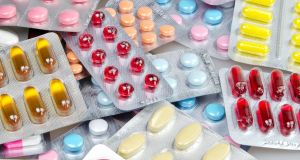 Fewer “innovative medicines” will be discovered and made publicly available if the European Union moves to alter patent rights that allow for a drug’s protection period to be extended, a lobby group has said.

In a submission to the Department of Business, Enterprise and Innovation, the Irish Pharmaceutical Healthcare Association (IPHA) warned that intellectual property rights for drug manufacturers would be weakened and research facilities placed at risk if the current environment changes.

The submission comes as the European Commission proposes to alter the system of patent protection. Currently, medicines are often granted a supplementary protection certificate (SPC), which provides an extension of up to five years to the standard 20-year patent-protection period. Both timeframes, manufacturers argue, compensate them for the time and costs involved in discovery of a new drug.

As part of the single market strategy announced in 2015, the commission proposed to amend the SPC regime, adding an “export manufacturing waiver”. This would result in a shortened patent protection for medicines granted a SPC, allowing copies, or generics, to be produced by manufacturers for export to countries outside the EU.

In its submission, the IPHA argued that Ireland would suffer “significant” reputational risk should the waiver be implemented.

“By curtailing IP rights, Ireland and Europe are sending a signal to the world that we undervalue our commitment to IP incentives and innovation,” the group said.

“Safeguarding a robust IP rights framework in Ireland and Europe is crucial to supporting new treatments, jobs and investments spurred by the innovative pharmaceutical industry.

“Any putative gains for generics manufacturing in Ireland, a minority part of pharmaceutical manufacturing, should not be considered in isolation from this negative effect on the true source of biopharmaceutical innovation and investment,” it added.

The IPHA’s submission noted that foreign-owned pharma companies directly employed 30,000 people in Ireland and had invested close to €10 billion in manufacturing and research sites across the country. It flagged recent investment from MSD and Abbott, both which suggested 850 new jobs in their sites would be created over the coming years.

Ireland’s research-based pharma industry, in particular, is under threat, the IPHA said. In 2016, pharma companies invested nearly 33 per cent more in research and development than the software industry, it added.

Of the 30,000 pharmaceutical jobs in Ireland, about 4,000 are supported in the generics industry, which believes the SPC waiver could create up to 25,000 new jobs in Europe.

“Although it is difficult to quantify the precise impact of the SPC waiver on Ireland’s economy and healthcare territory, we can say with certainty that, without inbuilt safeguards, the change will not incentivise new innovative medicines, new jobs or new investments,” the IPHA concluded.

10 US offers pathway to profit CRH paved in last recession