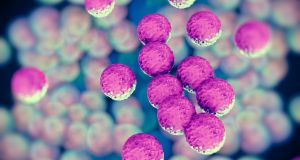 MRSA and E.coli could kill 10 million people worldwide by 2050.

Irish firm Kastus has received a €1.5 million investment as it plans its international expansion and grows its business. The investment was led by the Atlantic Bridge University Fund,

The company earlier this year announced it would commercialise research that had yielded a significant discovery to help in the fight against antibiotic resistant superbugs.

Kastus founder John Browne funded research by scientists at the Dublin Institute of Technology’s (DIT) Centre for Research in Engineering Surface Technology that developed nantotechnology to combat bugs such as MRSA and E.coli, which could kill 10 million people worldwide by 2050

The agent can be baked into everyday surfaces, including smartphones and door handles, killing bacteria or inhibiting its growth. It can be used on any paint, plastic, ceramic and glass surfaces.

The company plans to bring a range of products to the market, with he electronics and healthcare sectors getting products next year.

“This investment from Atlantic Bridge’s University Fund is strong validation that Kastus’ scientific research has great potential to be commercialised into international markets. To have the backing of Atlantic Bridge is an incredible endorsement for the future,” he said.

Kastus is also supported by Enterprise Ireland and Singapore-based investor syndicate, Carragh Holdings. The company also plans to set up a permanent presence in the US and UK markets.

1 Fianna Fáil may have just pressed the pause button on the property market
2 Who are Ireland’s 17 billionaires?
3 Saudi prince’s WhatsApp account ‘directly involved’ in Bezos hack
4 Are there annual limits on inheritances or gifts to a child?
5 My father in a nursing home wants to gift me his house
6 Dublin office vacancy rate hits lowest level in 20 years
7 European investor acquires Harcourt Road offices for €55m
8 Corporate tax change is inevitable, says Donohoe
9 Pensions in the spotlight, climate clash at Davos and confusion at O’Flynn empire
10 State subsidises public sector retirees to cover gap until State pension
Real news has value SUBSCRIBE