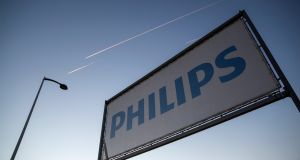 Philips will move much of its Glemsford, Suffolk-based production plant to Drachten in the Netherlands. Photograph: Balint Porneczi/Bloomberg

Philips said it will shutter a baby products factory in the UK, after concerns over the nation’s exit from the European Union intensified this week.

The Dutch health technology company will move much of its Glemsford, Suffolk-based production plant to Drachten in the Netherlands, as part of its efforts to cut plants from roughly 50 to about 30 globally, Philips said on Thursday in a statement. The remaining part will be moved to Asia.

Philips had warned multiple times that anything short of a seamless single-market customs union between the UK and the European Union could result in the shutdown of the site making products such as Avent brand bottled and pacifiers. Currency swings and increasing uncertainty about Brexit had started to hurt profitability at Glemsford, chief executive Frans van Houten has said.

“We need frictionless trade and if that is in any way hampered, then the future of that factory may be at risk,” Mr van Houten said in October.

The decision on the factory was separate from Brexit, a Philips spokesman said on Thursday, with the closure planned for 2020. The company employs some 1,500 workers in the UK.

Businesses remain in limbo after this week’s stark rejection in parliament of UK prime minister Theresa May’s Brexit deal. Political efforts have now swung to holding talks with opposition parties to find a consensus plan, weeks away from a March 29 deadline. Among the uncertainty, companies are preparing for a hard Brexit without a deal on customs procedures and tariffs. – Bloomberg