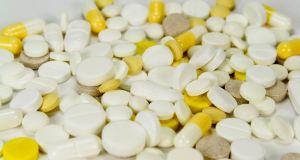 Shire fell as much as 4.4 per cent and was down 3.3 per cent in early afternoon trading in London.

Pharma group Shire fell the most in a month as investors, who pummelled Valeant Pharmaceuticals stock, began to shun other specialty drugmakers.

Valeant shares fell the most to date after the drugmaker cut its forecast for the year, issued a press release with a $600 million typo and held a conference call that left analysts and investors baffled.

Specialty drugmakers like Valeant and Dublin-based Shire sell medicines that are priced much higher than treatments for high blood pressure and other common conditions.

Shire fell as much as 4.4 per cent and was down 3.3 per cent in early afternoon trading in London. Endo International, another Irish-headquartered specialty drugmaker, fell 23 per cent. Like Valeant, Shire has been on an acquisition streak. – (Bloomberg)

1 Boeing identifies new software flaw in grounded 737 Max
2 Barclays to cut 100 senior roles as lender seeks to rein in costs
3 ‘Life in Vilnius reminds me of Ireland in the 1990s’
4 GoMo is being investigated by advertising authority
5 Festive season boosts footfall at Arnotts and Brown Thomas
6 Dublin housebuilder records €11m gain after striking deal with bankers
7 Hogan warns Britain on US trade deal as EU set to impose tariffs
8 Labour Court expected to rule on Paddy Power workers’ claim
9 Budget 2020: New emissions tax on new cars and used imports
10 Irish people like nothing more than being bribed with their own money
Real news has value SUBSCRIBE