Pfizer close to Allergan takeover, but US Treasury could scupper deal 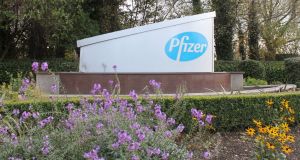 Pfizer is in advanced talks to buy Irish-based Allergan for as much as $380 (€353) per share, valuing the Botox maker at as much as $150 billion - if the US government doesn’t get in the way of the drug industry’s largest ever deal.

The companies aim to announce an agreement as soon as Monday, sources said. The price being discussed is $370 to $380 per share, according to the sources. However, the US Treasury Department’s letter on tax inversion deals, released on Wednesday, could delay the final agreement and change the terms of any transaction, another source said.

Pfizer shares sank 1.5 per cent to $32.80 and Allergan fell 1.4 per cent to $306.37 in early New York trade, on speculation that the deal could be hampered by the Treasury’s letter, which said the department is reviewing ways to address overseas acquisitions and plans to issue guidance later this week.

There have been a flurry of pharma and biotech mergers this year, already surpassing last year’s record of $220 billion in deals, according to data compiled by Bloomberg.

Buying Allergan, which has its legal domicile in Dublin, could let New York-based Pfizer relocate outside the US for tax purposes, a transaction known as an inversion.

“We struggle to see what the Treasury can do to specifically curb” a combination of the two companies, Citigroup analysts said in a note on Wednesday.

Still, the “political noise” that would surround Pfizer’s relocation “constitutes the most material hurdle to consummation of a transaction of this nature.”

Chances of the deal going through hinge more on “what price Allergan’s willing to take and also, we don’t know if there’s pressure from the White House in the background,” Umer Raffat, an analyst at Evercore ISI, said.

The Treasury Department doesn’t have power to block an inversion, but it could reduce the economic benefits of such a deal, he added.

A deal at $380 per share would be the largest acquisition this year in any industry and would surpass Pfizer’s $116 billion purchase of Warner-Lambert in 2000 as the biggest- ever transaction between drug companies, the Bloomberg-compiled data show. Representatives for Allergan and Pfizer declined to comment.

The transaction would strengthen Pfizer’s brand-name drug business and could pave the way for an eventual split in two.

Allergan’s market value of $122 billion could also allow the US pharma firm to transfer its headquarters to Ireland. The move requires a large foreign target in order to clear US tax rules, and was one of the reasons Pfizer sought to acquire AstraZeneca last year, before eventually withdrawing its proposal.

The Treasury Department is reviewing ways to address these overseas acquisitions and plans to issue guidance later this week to reduce the economic benefits of tax inversions, secretary Jack Lew said in the letter on Wednesday