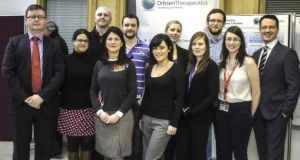 The Orbsen Therapeutics team. The company has already worked on a number of FP7-funded cell therapy projects

Orbsen Therapeutics, a spin-out from NUI Galway’s Regenerative Medicine Institute (Remedi) has announced plans to partner with the University of Birmingham in a €6 million project to fight liver disease.

The stem cell research company, which was founded by Prof Frank Barry and Prof Tom O’Brien in 2006, will collaborate with the university on an EU FP7-funded project known by as Merlin (MEsynchymal stem cells to Reduce Liver INflammation). The project, which is led by Prof Phil Newsome, will advance Orbsen’s proprietary cell therapy to a Phase 2a clinical trial.

Orbsen, which was recently shortlisted for this year’s Irish Times InterTradeIreland Innovation awards, has developed and is patenting a unique method of isolating therapeutic stem cells from human tissue at class-leading levels of purity.

The total research budget for the Merlin project is close to €6 million of which €1 million will go directly to Orbsen over the four-year period of the project.

“Orbsen has secured substantial amounts of research funding in the last 18 months which will further validate our product and bring us through to a “first in man” clinical trial in 2015/16. Our model has always focused on putting the ‘science first’ and we have successfully used that approach to develop a technology that could potentially position us and indeed Ireland at the leading edge of European Cell Therapy development,” said Orbsen’s chief executive Brian Molloy.

The Merlin project began in February and will run for fouryears culminating in a Phase 2a clinical trial in primary sclerosing cholangitis (an uncommon condition affecting the bile ducts and liver). The project is being co-ordinated bythe University of Birmingham and also includes the NHSBT in the UK, the Erasmus Medical Centre in Rotterdam, Fondazione Humanities per la Ricerca in Italy and BioInvision in the US.

This is Orbsen’s fourth success in attracting FP7 funding (the EU’s Seventh Framework Programme for Research). Other successful cell therapy projects for Orbsen include Purstem, Reddstar and DeCIDE.