The Government has taken up every option to purchase vaccines, Donnelly says 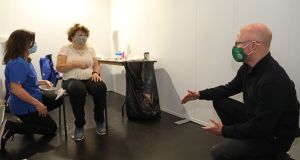 Ireland has total orders in place for 18.5 million doses of Covid-19 vaccines, enough to vaccinate 10.3 million people, according to Minister for Health Stephen Donnelly.

Mr Donnelly said he brought a memo to Cabinet on Tuesday to allow for the purchase of 1.1 million doses of Novovax vaccine and 330,000 doses of Valneva vaccine, in addition to existing orders.

Valneva can be stored for 18 months, Mr Donnelly said. Its Italian manufacturers has yet to apply for authorisation in Europe.

The Government has taken up every option to purchase vaccines that had been put to it, the Minister told a media briefing on Wednesday.

Mr Donnelly said over 7,000 vaccinators have been trained, adding that he would like to see dentists and optometrists brought into the vaccine rollout.

On mandatory quarantine, he said he hopes to move all stages of legislation through the Dail this week, before the Bill goes to the Seanad. Once signed, the measures would come into force a week or two later.

Meetings have been held with prospective operators and hotels, and the Government’s preference was for a single contractor to provide “end-to-end” service from the time a passenger arrives from overseas.

He said there would be “brighter days” ahead for vaccine rollout from April, when over 1 million doses would be administered, subject to the delivery of contracted supplies.

People at elevated risk of contracting Covid-19 may be moved up the priority for receiving vaccines, the briefing was told.

Carers, people required to work in certain workplaces and those living in congregated settings will be considered as part of a rolling review of vaccine prioritisation, according to Prof Karina Butler, chairwoman of the National Immunisation Advisory Committee.

Under changes announced on Tuesday evening, many patients with serious health conditions are to be vaccinated earlier.

Under a change to the Government’s vaccine allocation strategy, those aged 16 to 69 with a medical condition that puts them at very high risk of severe disease and death will now be inoculated in the fourth cohort of the strategy, after those aged over 70.

Among those who will now be inoculated in the fourth cohort are cancer patients on chemo- or radiotherapy, on dialysis or with uncontrolled diabetes, adults with down syndrome, and patients with motor neurone disease and severe cystic fibrosis.

Mr Donnelly told the briefing the change was consistent with the overall aim of the programme to reduce disease and mortality from the virus.

Arrangements are being made to deliver the Pfizer/BioNTech vaccine to house-bound older people, Prof Butler said. If some patients still couldn’t get this vaccine, they should get the AstraZeneca vaccine.

Asked about the prospects for next winter, Mr Donnelly said there were “unknowns” but at this stage the evidence suggested it would be very different from the past winter.