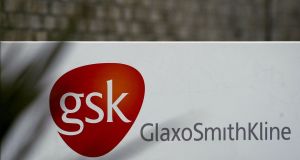 GlaxoSmithKline has taken a patent infringement action against Pfizer Ireland Pharmaceuticals and Pfizer Inc over a meningococcal group B vaccine. The case, which will come before the Commercial Court today, involves the Pfizer vaccine Trumenba, which is currently licensed in the US and which is planned to make available globally.

GlaxoSmithKline’s meningococcal group B vaccine Bexsero is currently the only available in most markets and is in such high demand that the multinational has been struggling to increase supply. A spokeswoman for Pfizer confirmed that the case was filed on October 12th and that Pfizer would be “vigorously” defending the action. There was no response to a request for a comment from GlaxoSmithKline.

The case is being taken by GlaxoSmithKline Biologicals SA of Belgium. Pfizer Ireland Pharmaceuticals of Ringaskiddy, Co Cork, produces products for sale around the globe.

Last month Glaxo said sales of its meningitis vaccine had doubled in the third quarter, forcing the company to race to bring new manufacturing capacity online. The vaccine was one of the stars of GSK’s third-quarter results. Revenues for the multinational were boosted by a “standout performance” from vaccines as well as gains for GSK’s HIV drugs and a recovery in respiratory sales.

Bexsero brought in £133 million in the quarter, with annual volume said to be running at about 10 million doses for 2016, up from 2.5 million a couple of years ago. The massive demand for the product was creating difficulties with supply, although the company said it was working hard to ramp up production so as not to put a brake on sales. GSK chief executive Sir Andrew Witty estimated that penetration of the vaccine was still only at about 10 per cent, so there was “an awful lot of opportunity to go on a global basis”.

Trumenba was granted Accelerated Approval by the US Food and Drug Administration (FDA) in October 2014. The vaccine is designed to prevent invasive meningococcal disease caused by Neisseria meningitidis serogroup B in individuals aged between ten and 25 years.

Meningococcal disease is a life-threatening illness caused by bacteria that infect the bloodstream (sepsis) and the lining that surrounds the brain and spinal cord (meningitis). Neisseria meningitidis is a leading cause of bacterial meningitis. The bacteria are transmitted from person to person through respiratory or throat secretions (eg by coughing, kissing or sharing eating utensils).