Fall in health cover a factor in €9.8m loss at Beacon Hospital in 2012 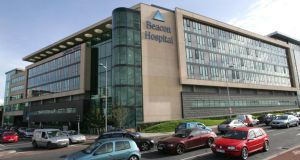 The figures will show that losses during the 12-month period were €9.8 million, in line with the €9.7 million that it lost in its 2011 financial year

Losses at UPMC Beacon Hospital Sandyford stabilised at €9.8 million last year as the private healthcare facility faced lower payments for insured patients and continued to invest in expanding its activities.

The Dublin-based private hospital, owned by US not-for-profit group, University of Pittsburgh Medical Centre (UPMC), is due to publish accounts shortly for its 2012 financial year, which ended on June 30th.

The figures will show that losses during the 12-month period were €9.8 million, in line with the €9.7 million that it lost in its 2011 financial year.

Chief executive Joel Yuhas said yesterday that falling reimbursement rates, the amount paid by insurers for treating patients, and declining numbers of people with health cover, were partly responsible for the losses.

Investment
However, he pointed out that UPMC Beacon also continued to invest in key specialist areas, including cardiovascular treatment, orthopaedics and oncology.

This included spending on the facilities needed to attract consultants to work at the hospital, and particularly on bringing in Irish specialists based abroad. “The losses have stabilised and we grew turnover despite declines in reimbursement and in the overall number of people with insurance,” he said.

Turnover
Mr Yuhas said it expected turnover this year to grow 11 per cent. He also predicted a fall in losses as investments made over the last two years begin to give a return.

The hospital now has the Republic’s biggest private orthopaedic facility, which employs 16 surgeons.

This area grew 22 per cent last year. Cardiovascular was up 20 per cent and oncology increased 18 per cent.

UPMC took control of the hospital four years ago. It now has 142 beds and employs more than 500 people.

It also has five satellite clinics, in Drogheda, Kildare, Mullingar, Waterford and Wexford.

It recently opened a diabetes centre, and expanded other services, including its emergency facility, which it expects will treat 14,000 people this year.