Engineering a future in equipment design 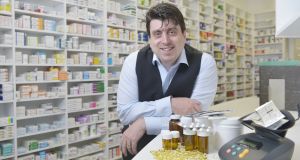 Chief executive Aiden Corcoran: “The biggest mistake for me was that I focused so much on business at the start that I forgot about the balance in life”

Team Horizon is a global life science group that specialises in designing and implementing equipment for pharma and biopharma manufacturers. This includes helping companies worldwide to adapt to serialisation, a method of identification coding which is a key process in anti-drug counterfeiting.

It was established in Westport, Co Mayo, in 2010 and employs 60 people. The company has offices around Ireland and in the UK, and has recently expanded to the US with a venture in Philadelphia.

What sets your business apart from the competition? Ireland has a huge engineering base and there are some great companies out there from an engineering point of view, but our vision is defined on manufacturing. About 90 per cent of our staff come from a background in manufacturing operations, so they’ve walked in the shoes of the client. I know people are leaving our competitors and coming to us because of that.

What’s been the biggest challenge you have had to face? We’ve grown just under 10-fold in about four or five years, and the biggest challenge for us is sustaining that growth under the current systems and facilities that are available for early stage companies. We’re now large enough to get the facilities we require and are just coming to the end of our process of refinancing so that will allow us to get fitter and faster. What has been your biggest success to date? Recently we won the Best Professional Services Award at the Mayo Business Awards. I was so proud because it was a personal one, that we could be recognised at home for being able to develop an international business and getting that nod from our own local people to say we were doing a good job.

What could the Government do to help SMEs in the current environment and stimulate the economy? The Government now has two fantastic organisations in the IDA and Enterprise Ireland, and they have been hugely supportive of us.

The SME sector is much bigger than the FDI sector and the Government should be creating a business environment around that.

Based on your experience in the downturn, are the banks in Ireland open for business to SMEs? The banks are still very cautious, and I don’t see them supporting early-stage companies. I don’t think they have the confidence after the downturn and perhaps it’s difficult for them to take the risk. They are getting better but they have a bit of a journey to go. If as a country we want to grow and create more jobs and wealth, we need to get into the mentality of having a financial system that supports smaller businesses.

What’s the biggest mistake you’ve made in business? The biggest mistake for me was that I focused so much on business at the start that I forgot about the balance in life. I’ve been working on mindfulness for the past couple of years and I’ve learned that you need to be as rigid with your personal and family goals as you are in your business life.

What advice would you give someone starting a business? A core belief of mine is “if you don’t know where you’re going, any road will take you there”. I love being a businessman but there are a lot of stressful times. The only thing to do is keep the head down and get going. To quote Winston Churchill: “When you’re going through hell, keep going.”

How do you see the short-term future for your business? I’m looking forward to the next six months. We’re launching our new offices in Philadelphia, and we’ll be able to provide our services internationally on a very secure footing. I’d like to think we’ll grow our team early next year to about 80 or 90 people. Hopefully with the new refinancing we’ll be able to grow from an early-stage company into a good solid operation.

What’s your business worth and would you sell it? The business is in early-stage growth and we’re by no means where we want to be, so it’s invaluable at this stage as the team hasn’t hit its potential yet. One of our competitors did make an offer, but we’re still building and I can’t see myself selling the business either now or in the long-term future.

www.teamhorizon.ie In conversation with Kirstin Campbell

Coronavirus: What we know so far about how Ireland is affected