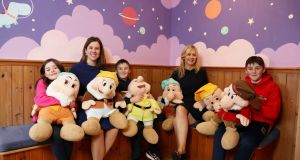 Vertex, the US pharmaceutical company whose Orkambi has been a breakthrough drug for Irish cystic fibrosis patients, is donating €250,000 to Barretstown.

The money will support a special seven-day siblings’ camp aimed at brothers and sisters of young patients currently being treated for, or recovering from, a serious illness.

Vertex Foundation, a non-profit group associated with the pharma company, will become the exclusive sponsor of the event. The gift to the Barretstown children’s charity is the first by the foundation in Ireland.

“When a child is diagnosed with a serious illness like cancer, normal family life is put on hold while the entire focus is on the ill child and their survival,” she said. “Siblings can often be forgotten about, yet themselves can struggle with feelings of guilt and incredible responsibility to put their own needs to one side given the fact their sibling is ill.

She said sibling camps “provide an incredible opportunity for up to 125 siblings to become the focus of attention, to come to camp and spend a week with other siblings going through the exact same journey as they are”.

“One focus of the foundation is providing support to families with children living with serious diseases. Barretstown shares this focus and is remarkable,” said Ms Jensen, who is also head of corporate responsibility at Vertex Pharmaceuticals.

Vertex secured Health Service Executive approval for Orkambi in Ireland in 2017 after prolonged negotiations and a major lobbying campaign by patients and their families. Results for 2018, the most recent available, show that Vertex’s Irish business made sales of €60 million in Ireland that year – most of it from Orkambi.

More recently, the company secured approval from the HSE last December for another cystic fibrosis drug, Trikafta, which has yet to be approved by the European Medicines Agency.

Cystic fibrosis is an inherited disease that primarily affects the lungs and digestive system of about 1,300 children and adults in Ireland. There is no cure. Ireland has one of the highest rates of cystic fibrosis in the world, with the incidence estimated at about four times the average for Europe.

Unemployment rate remains at near record 26.1% in May 11:35
Bank of England tells banks to get ready for no-deal Brexit 11:11
More than 2m people use website that shows lockdown distance limits 10:35
Angela Merkel sweeps in to save the euro zone 10:32
Google facing $5bn lawsuit for tracking in ‘private’ mode 09:51

1 In six months we will be in the grip of a 1980s-style recession
2 Aer Lingus wants quarantine period axed to resume flights in July
3 Angela Merkel sweeps in to save the euro zone
4 Deloitte expands into cloud computing with deal for DNM
5 Google facing $5bn lawsuit for tracking in ‘private’ mode
6 More than 2m people use website that shows lockdown distance limits
7 Bank of England tells banks to get ready for no-deal Brexit
8 Pinterest seeks new office for Dublin EMEA headquarters expansion
9 Should my mam wait for house prices to drop before buying?
10 Apple tax case: Four individual lawyers paid over €500,000 each
Real news has value SUBSCRIBE