The deal is predicated on the now familiar model of acquire, slash costs and point to advances in the share price 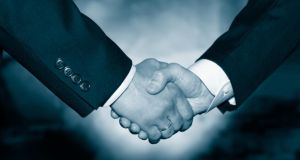 The pace of acquisition at the formerly stolid generics player has been bewildering in the 22 months since Watson acquired Actavis.

As the dust settles on Actavis’s latest megamerger, the Dublin-headquartered but US-based group managed to win its first post-M&A battle – persuading the ratings agencies to leave its debt at investment grade.

The pace of acquisition at the formerly stolid generics player has been bewildering in the 22 months since Watson acquired Actavis – borrowing the latter’s name in an effort to drive its international ambitions.

While Actavis will clearly take on extra debt to fund the deal, Moody’s was satisfied yesterday that increased earnings from Forest’s portfolio of drugs will see that burden ease with sufficient speed to allay concern’s over its rating. Fitch concurred.

The Forest deal is predicated on the by now familiar model of acquire, slash costs and point to advances in the share price. And certainly there will be synergies in the latest transaction, though whether they will reach the targeted €1 billion is a moot point. Tax savings from Irish domicile are scheduled to amount to just 10% of the target.

More importantly for its model, Actavis is no longer a generics giant with a few branded drugs tagging along. The Forest transaction means that branded drugs will account for about half of its revenues going forward. While the higher margins available in the branded sector will help its cause, the need to replenish pipeline will make it more difficult to achieve savings from its R&D budgets.

For Ireland, the blessing is mixed. Yes, Actavis is based here by virtue of its takeover last year of Warner Chilcott – a company that was itself essentially based here for tax reasons – but it has shown little interest in its new corporate domicile beyond the tax advantage.

Forest, for its part, had been looking at a move to Dublin for much the same reason. It had been touted as a bidder for Elan when that company was looking to avoid the clutches of Royalty Pharma, and was widely rumoured to be sizing up opportunities even after that prize went elsewhere.

In barely four months in the hot seat, chief executive Brent Saunders had set Forest squarely on the path of growth by acquisition with more than $3 billion in deals. It is arguable that Ireland Inc might have been better served by two distinct activist groups in the sector.