Allergan employs about 900 here, most at its manufacturing plant in Westport 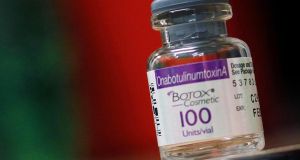 Botox is one of a number of pharmaceutical products made in Allergan’s Westport plant. Photograph: Shannon Stapleton/Files/Reuters

Allergan, the maker of Botox, has agreed to sell itself in a $66 billion (€53 billion) deal with fellow drugs group Actavis, with rival Valeant bowing out of its six-month long bitter pursuit.

Actavis said yesterday it will pay $219 for each Allergan share, valuing the Botox maker at $66 billion.

Valeant, whose takeover ambitions have been vigorously rebuffed by Allergan, said after the announcement it would review any agreement before determining a final course of action but that it could not “justify to its own shareholders paying a price of $219 or more per share for Allergan”.

Allergan employs about 900 people here, most at its main manufacturing plant in Westport, Co Mayo, where Botox is one of a number of pharmaceutical products made.

The offer from Actavis – itself domiciled in Ireland following its $9.2 billion takeover of Warner Chilcott last year – is a combination of $129.22 in cash and 0.3683 Actavis shares for each Allergan share. Based on the closing price of Actavis shares on November 14th, the deal is worth about $66 billion, amounting to $219 per Allergan share.

The price eclipses the most recent offer for Allergan by Valeant, the drugmaker that, joined with activist investor Bill Ackman, had been trying to acquire the company since April. Valeant said last month it was willing to increase its offer to $200 a share.

Actavis emerged as a counter bidder after months of battling between Valeant and Allergan. The Botox maker has always insisted that Valeant’s business model – which relies heavily on acquiring rivals and cutting costs, often through shedding research and development – would destroy its culture and ability to develop new products. The battle between the two companies, which frequently boiled over into ugly public relations spats, encapsulated a wider debate preoccupying the global pharmaceuticals industry about the appropriate levels of R&D investment large drugmakers should fund.

Allergan pursued several lines of defence, such as attempting to sue Mr Ackman and Valeant for insider trading and looking at making its own acquisitions to make itself too big for the Canadian group to swallow.

The saga has been the most enduring and complex plotline in this year’s frantic round of pharma deal-making.

Now that Abbvie’s £35 billion bid for Shire has collapsed and the chances of Pfizer making a fresh £69 billion bid for AstraZeneca have greatly diminished, a sale to Actavis would also be the biggest takeover deal of the year.

Last week, Mr Ackman identified Zoetis, the $22 billion animal health group, as a potential acquisition target for Valeant. One person close to the Canadian group described Zoetis as a “Plan B acquisition”. Mr Ackman still stands to profit hugely from any deal, as he owns close to 10 per cent of Allergan’s stock, and will share a portion of his gains with Valeant. – (Copyright The Financial Times Limited 2014)