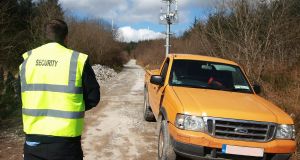 A security man at the entrance to the wind farm formerly owned by the Quinn Group, at Slieve Rushen, Co Cavan. Photograph: John McVitty

Businessman Joey Smith, Sean Quinn’s friend and a member of Concerned Irish Citizens, a pro-Quinn lobby group, has claimed the former tycoon is now “a prisoner” in the company he once owned.

“I know that from Sean himself. That’s a fact, that’s not hearsay. We are losing sight of what management aimed to do. Their sole function was to go in and buy the businesses back for Sean Quinn, ” Smith says.

However, this allegation is denied by sources close to the new management, who say the final decision about ownership will be made by the three US investment funds who bought the firms in 2014.

“He built them, they were his. For whatever reason there has been a change in direction and instead of working with Sean Quinn they are working against him. Sean Quinn wants to be back in charge, he told me that. He put it there,” said Mr Smith.

In relation to the intimidation, acts of sabotage and death threats to management of Quinn Industrial Holdings, Mr Smith said: “I condemn what has been done. But I’ll tell you something: I wouldn’t need the FBI to tell you why it is being done. Local people are getting very angry.

“I think Sean Quinn and the Quinn family are showing great restraint. I think if I was being put under the same pressure that they are being put under, I mightn’t be as easy to talk to. With regards to death threats, I don’t believe in death threats. Having said that, I can see why they would be made,” he said.

Equally supportive of Mr Quinn, Patricia Gilheany, secretary of Concerned Irish Citizens, is calling for Mr Quinn to take control of the business he spectacularly lost.

“Yes, he was made bankrupt but an awful lot of people were good business people and they are coming back. When you come out of your bankruptcy after three years you start again.

“Everybody appreciates that he is the only man who can sustain this business. The business cannot survive into the future without Sean Quinn in charge.”

Ms Gilheany claims that Mr Quinn is “being denied access to the accounts”.

“He is in effect a consultant who is not being consulted about anything. He is there in name only. You can’t be a consultant without knowing the figures,” she said.

In response to recent attacks, Ms Gilheany said: “We are all about peace. We have appealed to people at meetings not to do anything hasty, but we realise that there has to be talk. If people are being excluded, that doesn’t work and at the moment the Quinn family are being excluded. None of this is going to be resolved until there is a break in the current impasse.”

Meanwhile, the hostility in the Fermanagh-Cavan Border area continues. Close to the entrance of the Slieve Rushen Wind Farm, formerly owned by the Quinn Group, there is a security team with a mobile camera. Signs reading “vultures out” can be seen across Derrylin.

Businesswoman Betty Leonard said she was “disgusted” by the incidents.

“When is it going to stop? Everyone is aghast. I don’t want to see this carry-on going on for much longer, I don’t see the purpose of it. I thought the takeover was a good thingkeeping jobs in the area, all very positive. I am disgusted,” she said.

Fermanagh-South Tyrone Ulster Unionist MLA Alastair Patterson said he was “deeply angry that there are those who seem hellbent on putting these local jobs in jeopardy”.

Mr Patterson added: “Those responsible should not be supported in any way by the local community and anyone with any information should take it to the PSNI or the gardaí. I call on the hoods responsible to stop this criminality immediately.”