What is more important: strong banks or nice banks?

Business Opinion: it is only a slight exaggeration to say the Government has let the banks’ customers be sacrificed at the altar of exit from the bailout 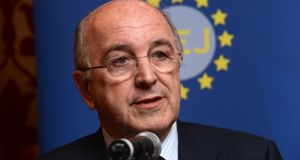 Competition in banking or, more accurately, the lack of it is back on the agenda in another welcome sign that the economy is returning to an even keel. The exigencies of the last few years have meant that nobody really gave too much thought to the issue. It seemed a bit beside the point to be worrying about competition between banks when, at one stage, it looked like we might have not have any banks at all.

Joaquín Almunia, the European competition commissioner, was in town last week and put the issue back on the table. Talking in fluent eurospeak, he expressed his concern in an interview with this paper at the “very reduced number of banks operating within the market”. He then went on to remind the Government, presumably, that any approval by the commission of its plans to restructure Permanent TSB and AIB would have to include a proviso that they co-operate with new entrants.

Mr Almunia seemed to set great store by this condition which he appeared to consider eminently enforceable given the extent to which the banks are indebted to the taxpayer – both literally and figuratively – for their survival. One fears this says more about Mr Almunia’s European social democratic credentials than it does about his knowledge of the relationship between the Government and the banks here over the past five years.

Had he observed things a little bit more closely he would have noticed that the Government has been very, very reluctant to flex its muscle as shareholder and bankroller of the banks to force them to co-operate with Government policy.

It is only a slight exaggeration to say the Government has let the banks’ customers be sacrificed at the altar of exit from the bailout. The overwhelming priority seems to have been to make the banks look as healthy as possible. And, in the case of Bank of Ireland, to attract overseas investors.

As a result, there has been a disconnect between what the Government has said it wants the banks its owns and controls to do and what it has actually made them do.

Again, exaggerating only slightly more, the economy and the consumer has been helping the banks recover rather than the other way about, which would be a more normal state of affairs.

The arguments for the de facto policy of going easy on the banks – rather than the publicly expressed policy of making them do their bit – are actually quite strong and rational. It is easy to forget how bad things looked in 2010 when the State was shut out of the markets and anyone predicting that we would exit the bailout with a decent tailwind would be laughed off the stage. Strong banks were what was needed; not nice banks.

The banks themselves needed no encouragement to protect themselves and, again, it was perfectly rational behaviour from their perspective. Presumably, they must have perceived some sort of tacit understand or tolerance. How else can you explain the situation that developed last year when the Central Bank had to threaten the banks with additional capital requirements if they did not start seriously addressing the issue of unsustainable mortgage default?

The question that now arises as the banks inch back to profitability is what sort of dynamic exists today and where does the balance lie? What is more important for the economy now; strong banks or nice banks?

The “strong banks” argument is still powerful. All three State-backed banks – Bank of Ireland, AIB and Permanent TSB – are still dependent on the ECB for liquidity and getting that monkey off the national back requires them to attract funds from elsewhere. It might be prudent, then, to assume the worst and it’s worth noting the chairman of the Irish Fiscal Advisory Council, Prof John McHale offered a personal opinion last week that legislation to stop banks pushing losses from their tracker mortgages on to their variable rate customers might be a good idea.

You would have to wonder what Joaquin Almunia would make of the notion of legislation to protect people from the excesses of Government-owned and backed banks. One suspects it might seem a little counter-intuitive if you are Joaquín Almunia but in the topsy-turvy world of bailout Ireland it is apparently unremarkable.

10 Ireland v the rest of the world: Do we pay too much tax?