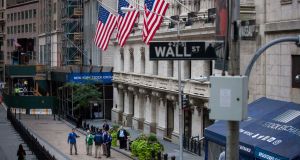 Wall Street analysts have been urging investors all year to buy stocks in the big US banks. But Wall Street itself is not listening.

Executives and board members at the top six US banks have been consistent sellers of their own banks’ shares this year, according to a Financial Times analysis of disclosures tracked by Bloomberg.

Insiders at the big six banks by assets – JPMorgan Chase, Bank of America, Wells Fargo, Citigroup, Goldman Sachs and Morgan Stanley – have in total sold a net 9.32 million shares on the open market in 2017. Even excluding Warren Buffett’s share sale in Wells in April, to avoid tripping over rules capping ownership by a non-bank, sales by insiders outnumber purchases by about 14 to one.

That is an unusually long streak of net sales, across each of the big six. Last year, for example, insiders at JPMorgan, Citigroup and Bank of America bought more shares than they sold.

Observers say the sales may be driven by disenchantment with US president Donald Trump, who rode to power partly on a promise of higher interest rates, lower taxes and lighter regulation. That rhetoric helped propel bank stocks sharply higher in the weeks after the election last November.

But a series of policy setbacks have cast doubt on those objectives, bringing bank stocks back down. Last week, the KBW Banks index – a grouping of two dozen Wall Street and regional banks – was just 3 per cent higher so far this year.

Buying and selling of shares by bank insiders can have a powerful signalling effect. Last year Jamie Dimon, chairman and chief executive of JPMorgan, seemed to call an end to a mini-rout in bank stocks when he bought half a million shares in his own bank.

But senior insiders have made no demonstrations of faith this year, suggesting they fear that the big gains under Mr Trump have come to an end. Goldman and Morgan Stanley insiders have not bought on the open market this year, according to Bloomberg.– (Copyright The Financial Times Limited 2017)

8 Pilita Clark: The scourge of work email is far worse than you think