US allowed to seize $300m in alleged bribery scheme

Some of Russian-Uzbekistani bribery scandal funds held in Ireland 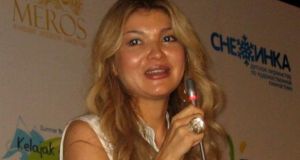 Gulnara Karimova, eldest daughter of Uzbekistan’s president Islam Karimov: in 2014, Swiss authorities said they had frozen more than $900 million in assets linked to her as part of an investigation into corruption in Uzbekistan. Photograph: Muhammad Sharif/AFP/Getty Images

A US court last night cleared the way for the US Justice Department to seize $300 million (€270 million) allegedly linked to a Russian-Uzbekistani bribery scandal and held in bank accounts in Ireland, Belgium and Luxembourg.

A company in the IFSC in Dublin is allegedly holding some of the funds at the heart of a bribery scheme involving Russian phone companies and the family of Uzbekistan’s president.

Last night in Manhattan, US District Judge Andrew Carter allowed the government to take the funds held by Bank of New York Mellon Corp in Ireland, Luxembourg and Belgium and in Clearstream Banking SA accounts linked to the companies in Luxembourg.

The US said in a complaint the money is tied to an international money-laundering conspiracy involving payments to an unidentified “Government Official A,” who is a relative of Uzbekistan’s president, Islam Karimov.

As reported last week in The Irish Times, the US alleged the money is linked to corrupt payments totalling $500 million made by Mobile Telesystems OJSC (MTS) and Vimpelcom to Official A, so he/she would influence the government in Uzbekistan in relation to mobile phone licences and radio frequencies.

Although the official is not named in the claim, there have been widespread reports of investigations into Gulnara Karimova, daughter of Uzbekistan president Islam Karimov.

The court document grounding the claim says the payments were made between 2004 and 2011 to shell companies owned by the official. The payments were nominally in return for equity interests in the Russian companies’ Uzbek subsidiaries, business transactions and consultancy services.

It is alleged the proceeds of the corruption were then laundered in a complicated series of transactions including the purchase of investment portfolios and assets in Ireland, Luxembourg and Belgium.

The alleged money-laundering involved transferring the funds through correspondent bank accounts in the US, giving the US authorities jurisdiction in the matter.

Vimpelcom said in March 2014 that its Amsterdam headquarters had been raided by Dutch prosecutors and that the US Securities and Exchange Commission demanded documents as part of the probe into its business.