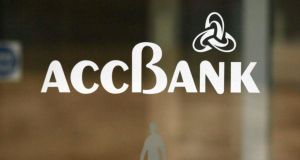 A former ACC bank official who used falsified P60s to boost customers’ incomes so they could secure inflated mortgages during the boom would never have been caught if the “property bubble” had not burst, a court heard.

Judge Rory McCabe sentenced Aiden Corcoran (38) of Castan, Doughiska, Galway to six months in prison on each of the 11 charges, the sentences to run concurrently and suspended them all for six months.

Corcoran pleaded guilty before Galway Circuit Criminal Court to 11 sample charges of using falsified P60s, copies of falsified P60s and one copy of end-of-year accounts, in the names of various people on various dates between 2006 and 2008, knowing they were false, to induce another person to accept them as genuine, contrary to the Criminal Justice (Theft and Fraud Offences) Act 2001.

Detective Garda Paul McHugh said 13 loans with a total value of €6.1 million were involved in the investigation but only €2 million of that had been loaned using files containing false P60s. In some cases, some of the false documents were only added to the loan files after the loans had issued and had therefore not been used in the bank’s decision to grant the loans.

John Jordan SC, defending, said his client had been put under enormous pressure by the bank to meet higher targets during the Celtic Tiger years.

He said the interests of justice would not be served by sending the accused to prison.

1 Corona beer firm reeling after 8% slide due to coronavirus
2 How well paid do you think you are? Here’s how to work it out
3 Life as a Facebook moderator: ‘People are awful. This is what my job has taught me’
4 Coronavirus and the etiquette of working from home
5 Flight attendent seeks High Court injunction against Aer Lingus
6 Coronavirus-induced sell-off wipes €6.7bn off value of shares in Dublin
7 Accumulated profits at Marian Finucane firm exceeded €830,000
8 AIB to sell more than 500 ATMs to Brink’s
9 Wall Street hammered on coronavirus fears while Dublin dips 4%
10 Bank leaked my loan request to family who tried to rip me off
Real news has value SUBSCRIBE