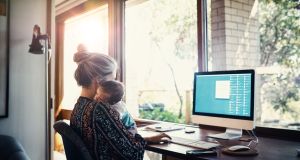 Flexible and home working arrangements can bring positives, but on the other hand they can also blur the lines between work and home life

The Financial Services Union (FSU) has written to Heather Humphreys, the Minister for Business, Enterprise and Innovation, urging the Government to press ahead with legal restrictions on after-hours emails and calls.

The union for bankers told the Minister that stress caused by after-hours work contact on smartphones and tablets is causing a “crisis in mental health”.

Fresh research from the FSU, which will be formally released in coming weeks, shows that one in four workers “feel under pressure to answer calls and emails after work hours”. Less than one in 10 of 2,000 workers surveyed said their employer is engaging “in some efforts” to prevent over-use of technology.

“Behind the slick facade of many contemporary employers is a far less cool working environment,” wrote Gareth Murphy, acting general secretary of the FSU in the letter to the Minister.

“These [survey] findings highlight the need for action on workers’ right to disconnect and protection of workers from techno-stress and overwork,” he wrote.

Mr Murphy claimed that employers would not deal with the issue on their own, as they are “fundamentally the cause of the crisis in mental health emanating from work”.

The FSU said it was engaging with banks and other employers in its orbit in an effort to get them to implement policies. But it also wants the Government to bring in legislation on the issue.

Ms Humphreys said earlier this week that her department would examine new rules in France that have established the “right to disconnect” for workers, which were introduced there to protect work-life balance.

Speaking to The Irish Times after the letter was sent to the Minister on Friday, Mr Murphy welcomed her commitment to examining the issue and said the FSU was seeking a meeting with her.

He said an “acute” increase in work stress for many FSU members, and other types of workers, “can be attributed to new technology, such as smartphones”.

“Flexible and home working arrangements can bring positives, but on the other hand they can also blur the lines between work and home life,” he said.