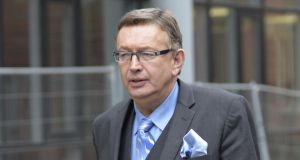 Solicitor Gerald Kean: lender EBS says he should not have provided title deeds to Permanent TSB under a refinancing deal relating to loans of a former girlfriend. Photograph: Alan Betson

Title deeds for two properties were incorrectly given by solicitor Gerald Kean to Permanent TSB in 2008, an expert witness told the High Court Friday. They related to a refinancing arrangement for three of Dolores Corcoran’s four loans with EBS in circumstances where EBS had a first legal mortgage over the properties, the witness said.

In re-examination by Andrew Fitzpatrick SC, for EBS, consultant solicitor Michael Carrigan agreed Mr Kean gave a signed undertaking to EBS concerning title deeds of two properties in Co Waterford owned by Ms Corcoran, a former girlfriend of his, properties EBS claims it has a first legal mortgage on.

The person who gives the undertaking has the primary liability for any breach of that undertaking, he agreed.

Mr Carrigan was giving evidence as an expert witness for EBS in its continuing action against Mr Kean alleging he failed to comply with his undertaking to return the title deeds to the two properties – at Portnahully, Carrigeen and Hunter’s Way, Williamstown, Co Waterford – owned by Ms Corcoran.

Earlier the court heard that the Law Society had been in discussion for years with financial institutions over difficulties experienced by solicitors seeking precise figures, from lenders, to redeem loans on properties.

Mr Carrigan said he was not involved in those discussions but believed agreement was reached some years ago between lenders and the Law Society concerning what redemption information they would provide and how.

He was not aware if there was a particular problem with the EBS building society’s loan redemption process arising from that process being based on loan accounts rather than properties, he told Richard Kean SC.

When Mr Kean put to him that the “real failure” in EBS’s case against Gerald Kean was in not providing the relevant redemption figures “properly”, Mr Carrigan said: “That’s not for me to say.”

In his view, a solicitor must be satisfied, when they have paid off a sum to a lender on behalf of a client, that they have paid enough to allow for release of the property’s title deeds.

EBS claims charges over those properties are part of its security for about some €600,000 allegedly outstanding from facilities advanced between 2004 and 2006 to Ms Corcoran.

It claims Mr Kean, in 2008, should not have provided the title deeds to Permanent TSB under a refinancing by Ms Corcoran of three of her four EBS loans with PTSB.

Mr Kean denies the claims and contends the EBS response to letters seeking redemption figures for all loans outstanding on three of Ms Corcoran’s properties failed to give the precise sums.

He also argues a letter from EBS, of June 18th, 2008, concerning a loan redemption, which the Kean firm say was received some time after June 25th, 2008, and after the title deeds were given to PTSB, did not adequately, or at all, alert the law firm to the existence of an outstanding EBS claim.

Under cross-examination on Friday, Mr Carrigan agreed with Richard Kean that a solicitor cannot be expected to know all the loan security arrangements a client may have agreed with a lender over a period of years.

The case continues before Mr Justice Michael Twomey on Tuesday.

1 Revenue publishes list of companies tapping State for wage support
2 Grocery shopping app Buymie delivering for Devan Hughes
3 Developers may need to go back to the drawing board as one-beds fall from favour
4 How long can Government afford to keep State pension age at 66?
5 107 jobs at risk as Broderick’s shareholder considers examinership
6 Bake-off soy sauce tweet backfires for UK trade ministry
7 Over 60% of mortgage holders miss chance to save €10,000
8 Will remote working become the norm?
9 Bought a desk or a chair? Revenue rules out tax relief for home workers
10 Covid-19 will have a significantly worse impact on UK public finances than on ours
Real news has value SUBSCRIBE