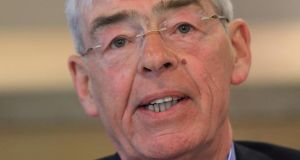 Alan Dukes at the press conference in Dublin he organised to discuss the ongoing controversy over Siteserv. Photograph: Nick Bradshaw

IBRC rejected a proposal to appoint the Department of Finance’s most senior civil servant to the board of the troubled bank, with chairman Alan Dukes claiming it would not be appropriate.

The proposal was made by the then Department of Finance secretary general John Moran in a private conversation, according to Mr Dukes.

He told Mr Moran it would not be a good idea “because he would be seriously conflicted”.

Mr Dukes claimed on Friday night that Mr Moran had previously approached him when he worked for the Central Bank seeking an executive position at IBRC. This was strongly denied by Mr Moran last night, in a text to this newspaper.

It marked a day featuring a welter of claims and counterclaims involving the Department of Finance and IBRC. The controversy began initially over the bank’s handling of the sale of Siteserv, a utilities servicing group which was sold for €45 million to businessman Denis O’Brien in 2012.

The row has spilled over to engulf former IBRC chief executive Mike Aynsley, former bank chairman Mr Dukes as well as the Government, and the Department of Finance.

Yesterday, Mr Aynsley accused the Government of selectively releasing documents on the Siteserv deal while Mr Dukes called for documents which were heavily redacted to be released in full.

When informed of Mr Moran’s denial over the IBRC job approach (not the appointment to the board while in the Department of Finance), Mr Dukes said he “stands over” his version of events.

Mr Dukes spoke in Dublin at a press conference on Friday that he organised to discuss the ongoing controversy over Siteserv.

Mr Dukes also revealed that Richard Woodhouse, then IBRC’s head of asset management, was kept out of discussions over the Siteserv deal within IBRC, as he also managed the relationship between the bank and Mr O’Brien.

“We appointed Tom Hunersen instead, and also Peter Rossiter, the chief risk officer, to oversee the transaction,” said Mr Dukes.

Mr Hunersen was at the time its head of corporate and institutional recovery. He left IBRC in 2013 and is now an advisor to Spritz, a US-based technology company in which Mr O’Brien is an investor.

The Government this week appointed the special liquidators of IBRC, Kieran Wallace and Eamonn Richardson of KPMG, to review the Siteserv transaction and other large sell-offs by IBRC.

Department of Finance documents released under freedom of information show that officials raised concerns over the deal.

Speaking at the offices of Eames Solicitors in Dublin, Mr Dukes said it was “scandalous” that the review would look for any evidence of criminality or malpractice, as suggested yesterday by Minister for Finance Michael Noonan.

“I am extremely angry about that. Any mention of criminality is outrageous. We are getting near the theatre of the absurd,” Mr Dukes said.