Sir Anthony O’Reilly fought AIB to the end, and slightly beyond 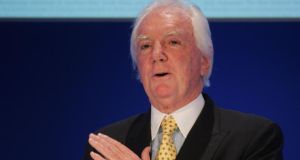 Sir Anthony O’Reilly: Failed in effort to obtain stay on €45m judgment against him

The sun yesterday streamed in through the glass ceiling of Court Number 1, but for Sir Anthony O’Reilly, dark clouds were already starting to gather.

Mr Justice Peter Kelly took 40 minutes to deliver his judgment, but it could be summed up in one word: No. He refused the former billionaire’s application for a six-month stay on €45 million of judgments obtained against him and his companies by AIB.

Bernard Dunleavy, Sir Anthony’s counsel, had clearly realised what was coming early on in the judge’s delivery. Chin in hand and solemn-faced, he absorbed Mr Justice Kelly’s words, staring straight ahead as the judge brought down the curtains on his client’s near 40-year reign at the top table of Irish business.

Sir Anthony, who was at his home in Deauville in France and not present in the court, had clearly instructed his lawyers to make one last plea in the event of a defeat.

Immediately after the judgment, Mr Dunleavy was on his feet and asked if Mr Justice Kelly would give his client a short stay, even until Tuesday.

A four-day delay, said Mr Dunleavy, would allow Sir Anthony to hold talks with his other banks over the planned orderly sale of his 750-acre Castlemartin estate, which could be scuppered by AIB’s victory.

The stay of execution, the barrister argued, would also allow Sir Anthony time to consider a possible Supreme Court appeal against the decision.

Mr Dunleavy said his client would “be prepared to fly back in from France over the weekend” for talks with all of his banks if only he could get a short stay. The judge hesitated, and asked AIB’s counsel, James Doherty, to respond.

The bank’s lawyer said it would “create too much uncertainty”. Mr Justice Kelly looked set to knock back Mr Dunleavy’s request, when one of Sir Anthony’s solicitors charged up the court and whispered in Mr Dunleavy’s ear.

The barrister told the judge that if the short stay were awarded, Sir Anthony would even commit to immediately inform AIB if any of his other banks started to move on him.

It was last gasp, desperate stuff. Unfortunately for Sir Anthony, it was also to no avail and Mr Justice Kelly refused. Sir Anthony’s fate was sealed.