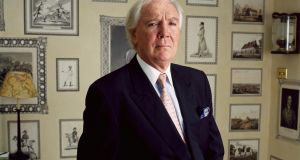 Sir Anthony O’Reilly: Was told to produce further information to AIB in relation to his assets, ahead of the court hearing yesterday. Photograph: Getty Images

Sir Anthony O’Reilly has been declared bankrupt by a court in the Bahamas and given the go-ahead to file for a personal insolvency arrangement.

The move will give him protection from creditors under Bahamian bankruptcy law, despite objections by AIB, one of his creditors. He will now be able to apply for a formal deal with creditors, know as a composition, which would involve the sale of assets and the distribution of the proceeds to creditors.

Sir Anthony had asked the court to grant his application for insolvency under Bahamian law. In court yesterday, AIB opposed the application and asked the court to refuse to approve an arrangement that would offer Sir Anthony protection from creditors, in return for an agreement to sell off assets and repay the proceeds raised as a final settlement.

The former billionaire’s lawyer, John Delaney QC, told Justice Milton Evans that the claims of AIB that the proper guidelines for the filing of the application were not followed by Sir Anthony were not correct.

Mr Delaney said the guidelines were followed to the ‘T’ , except for registering his client’s notion of motion to the Bahamas’ Supreme Court Registrar. He said it was due to the dispute with AIB, the only unsecured creditor opposing the application.

Justice Evans ruled that Sir Anthony should now be adjudged bankrupt and allowed file for personal insolvency, or a composition, under Bahamian bankruptcy law. A written judgment is expected on Tuesday, but it is a landmark in Sir Anthony’s attempts to find a way out of the massive personal debts he faced. It is not clear whether AIB has any legal route to dispute the judgment.

Having held meetings with his creditors, Sir Anthony was seeking, as part of the arrangement, protection of his property from being accessed or seized, the approval of the composition with creditors and its official registration and the appointment of a trustee of his assets and affairs. The trustee would be responsible for the sale of assets and distribution of the proceeds.

He has also asked that the protections extend to the US and Ireland, meaning creditors such as AIB could not take further action to seize his assets on foot of money owed.

At the hearing in the Ansbacher House courtroom, Sophia Rolle, one of three lawyers representing AIB, asked Justice Evans to strike out the original and amended petitions of Sir Anthony on the basis that the proceedings were not properly placed before the court and that it had a lack of inherent jurisdiction.

She focused on the provisions of section 97 of the Bahamas Bankruptcy Act, the 1871 Bankruptcy Rules and referenced affidavits in support of her argument. For Sir Anthony, Mr Delaney argued that the application should be granted and that it had the support of the bulk of creditors.

AIB, which has also secured judgments in Ireland, has long signalled its opposition to Sir Anthony’s plan to strike a deal with creditors in the Bahamas.

In essence, it is a a battle over who will get what when his assets are sold off. It appears AIB would prefer to continue action through the Irish courts to try to maximise its return on the sale of assets, but the court in the Bahamas has accepted that Sir Anthony should be allowed to avail of the bankruptcy proceedings there.

The composition procedure requires an approval by a majority of creditors by number, and these creditors must represent more than three-quarters of total debts owed. A trustee takes control of the assets of the person involved and sells them off, distributing the proceeds to creditors on an agreed basis.

O’Reilly’s debts are substantial, and under the proposal creditors would take a significant cut on what they are owed. Information before the Irish High Court suggested last year that his total debts stood at €195 million. This figure is believed to have since reduced significantly, possibly to somewhere closer to €100 million.

Sir Anthony owed money to about 10 banks in total, but AIB has been the most aggressive in pursuing its debts through the court, appearing to steal a march on some of the others through its actions.

By mid-2014 AIB had judgments totalling €45 million, including a judgment for €22.5 million against Sir Anthony personally and the remainder against a number of his companies. Its move ended a forbearance arrangement under which his creditor banks had allowed him time to sell assets and formulate a repayment plan.

The matter has come back before the courts sporadically since, most recently last month, when Sir Anthony was told to produce further information to AIB in relation to his assets, ahead of the court hearing under way yesterday.

The bank said in court that his total indebtedness to it at that stage stood at €15 million.

AIB’s objections in court yesterday were a continuation of its previous contention that Sir Anthony had made procedural errors in his application before the courts in the Bahamas and also that the courts there did not have proper jurisdiction to make the decision, despite Sir Anthony’s residence there.

The story of how it all came to this is now well familiar – the then Tony O’Reilly’s rise from marketing success in Ireland to head Heinz in the US, and then investments back home in Independent News & Media and Waterford Wedgwood.

A former Irish and Lions rugby star, he was the leading business figure of his day. However, his two big Irish investments were eventually to prove his financial downfall. First the collapse of Waterford Wedgwood, and then the loss from the share price drop of Independent News & Media – followed by a fierce battle with businessman Denis O’Brien – destroyed Sir Anthony’s finances.

By 2009 he was borrowing from Irish banks, gambling that he could somehow restore his finances, perhaps via a shareholding in Providence Resources. In the end it all unravelled, leaving the former billionaire to apply for what is in effect a personal insolvency arrangement. It now appears the way is clear to do this, though further legal action cannot be ruled out.

Lamech Johnson is a journalist with The Tribune in Nassau