Individuals workers receive up to €4,500, while branch managers get larger sums 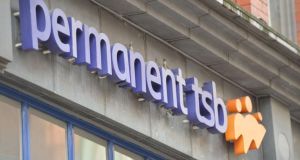 Permanent TSB denied the payments were bonuses. A spokesman explained they were commissions and have been part of staff’s salaries since before the financial crash in 2008. Photograph: Alan Betson

The largely State-owned bank confirmed it had paid an extra €1 million to workers in 64 of its branches in the Republic after they reached agreed targets for the sale of financial products.

Individuals workers received up to €4,500 each, while branch managers received larger sums.

The bank denied the payments were bonuses. A spokesman explained they were commissions and have been part of staff’s salaries since before the financial crash in 2008.

A “bonus culture” in the Republic’s banks is partly blamed for the problems that led to the property bubble and financial crash.

PTSB is more than 99 per cent owned by the State after the Government had to bail out the retail lender in 2011.

The bank is planning to raise €525 million from private investors to begin repaying the €2.7 billion it received from the exchequer four years ago and to fill a €125 million gap in its capital.

It will use €400 million to repay the State’s contingent capital notes and the balance to shore up its capital.

Moody’s recently altered its review status on PTSB’s baseline credit assessment (BCA), changing it from review for downgrade to review with direction uncertain.

The change in the review status on the caa3 assessment comes after the European Commission approved in principle the bank’s capital-raising restructuring plan.

Other factors affecting the review status also included the European Central Bank’s single supervisory mechanism endorsement of the recapitalisation plan and recent financial results from the bank that were more positive.

The bank’s deposit ratings and senior debt ratings were still on review for downgrade, with Moody’s extending it. Moody’s said the ratings are driven not only by the BCA outcome but also by the advanced loss- given-failure analysis, which it recently introduced.