Clients of Killarney-based firm include Ryanair, Hertz, Hilton Hotels and Bank of China 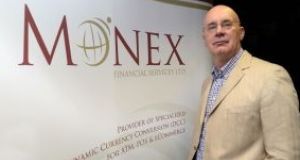 Monex chief executive and founder Frank Murphy: “Our strategy works, the figures speak for themselves”

The company, whose clients include Ryanair, Hertz, Hilton Hotels and Bank of China, recorded revenues of €108 million for 2016, up from €99 million a year earlier.

The Killarney-based company, which employs over 120 people worldwide, was established in 2008 by former Fexco senior executive Frank Murphy. It generated pretax profits of €8.47 million last year, up 32 per cent on the €6.4 million recorded a year earlier and, reversing a 16 per cent decline from 2014.

Mr Murphy still holds 85 per cent of the ordinary share capital, with chief operating officer Michael Crowley owning the remainder of the shares.

The group, whose dynamic currency conversion (DCC) service is available on 68,000 ATMs worldwide, also operates client-support services in the United Arab Emirates, the US and Asia.

“Our targeted expansion programme is clearly aligned with profit projections and will continue throughout 2017 encompassing industry diversification and cross-platform service development,” Mr Murphy said. “Our strategy works, the figures speak for themselves.”