In 49 days of hearings, 131 witnesses gave testimony. Its purpose: to investigate Ireland’s troika bailout. Its cost: €6.6 million. What did it get right, and what did it get wrong? 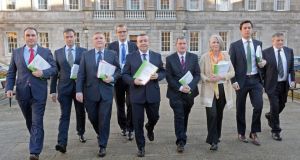 After 20 months of toil the Oireachtas banking inquiry published its final report this week, in three volumes. It followed public testimony from 131 witnesses across 49 days of hearings, supported by 500,000 documents gathered from State institutions, banks and auditors. The work of the 11-member committee – officially, the Joint Committee of Inquiry into the Banking Crisis – and 57 support staff cost €6.6 million and brought with it a number of highs and lows.

At the launch of the report the inquiry’s chairman, Ciarán Lynch, said it had exploded two myths: that the bank-guarantee decision was taken on a single night in September 2008 amid panic that some Irish banks wouldn’t be able to open for business the following day, and that Ireland was bounced into a bailout programme.

Much detail emerged about the night of the guarantee and the negotiation of Ireland’s bailout programme with the European Union and the International Monetary Fund, helping the public to join the dots on these events in our history.

We now know that the “idea of a guarantee was considered as part of a range of options as early as in January 2008”. It wasn’t a knee-jerk reaction to the panic that surrounded global financial markets at the time. Indeed, Kevin Cardiff, a former senior official at the Department of Finance, told the committee that, in his view, Taoiseach Brian Cowen already had his mind made up on entering Government Buildings that night.

By October 2010 Ireland’s entry to a bailout programme had become “inevitable”, according to the inquiry. The “notion” that Ireland needed external financial assistance was first considered in September 2010, with a request from Cardiff for “very preliminary and informal work on how a country enters an IMF programme”.

Cowen’s government formally applied to enter a troika bailout programme – funded by the EU, the IMF and the European Central Bank – on November 27th, 2010.

It lifted the lid on the ECB’s heavy-handed role

The most explosive revelation was Minister for Finance Michael Noonan’s testimony that the former ECB president Jean-Claude Trichet had warned him in late March 2011 that a “bomb” would go off in Dublin’s financial sector if he pressed ahead with a plan to implement haircuts on €3.7 billion worth of unsecured, unguaranteed senior debt connected with IBRC, which comprised the old Anglo Irish Bank and Irish Nationwide Building Society.

Trichet warned that such a move would be considered a default. At the time Anglo Irish Bank was in receipt of about €41 billion in emergency liquidity assistance from the ECB. Trichet warned that this would be pulled, as the Frankfurt regulator is precluded from providing such support to a bank in default.

Noonan scrapped the plan, at the last minute changing a Dáil speech on the burden-sharing idea.

The ECB had earlier blocked an attempt to impose haircuts on senior bondholders in late 2010, as Ireland was negotiating its bailout programme. This was in spite of the IMF being willing to consider such a move.

It compelled Michael Fingleton to appear

Having kept his head down for six years, the former Irish Nationwide chief Michael Fingleton tried to avoid appearing before the inquiry, but the committee persisted, and he was forced to give evidence in September.

Fingleton was arguably the star witness, as the most senior banker from either Anglo or Irish Nationwide to give testimony. We heard about his €30 million pension pot and how he couldn’t fathom why Irish Nationwide, which he led for 38 years, needed a €5.4 billion taxpayer bailout.

He had no regrets about decisions he had taken, he said, but did regret the eventual size of the building society’s loan book and felt bad that the State had had to pick up the tab for the banking collapse.

It failed to to make adverse findings against bankers

It wasn’t so much a failure of the committee as a flaw in the legislation covering the work of parliamentary inquiries. It was strange, to say the least, that an inquiry into the causes of the banking crash, which cost taxpayers €64 billion, did not make an adverse finding against a single banker in its report.

It didn't get under the skin of Anglo Irish Bank

At the report launch, the committee member Michael McGrath, of Fianna Fáil, expressed his frustration that the inquiry was only able to scratch at the surface of Anglo Irish Bank, which has cost the country the guts of €30 billion.

Attempts to get Anglo’s former chairman Seán FitzPatrick and his fellow executives Willie McAteer, John Bowe and Pat Whelan to testify were blocked by the Director of Public Prosecutions because of pending criminal trials.

The DPP also intervened to prevent the committee from publishing the written statement by Anglo’s former chief executive David Drumm, who had refused to return from the United States.

The committee heard from former Anglo board members and executives, but there was a large gap in its work.

It couldn’t persuade the ECB to give evidence

The committee made “significant efforts to engage constructively with the ECB in order to obtain relevant and material evidence” while respecting that it would have to voluntarily assist the committee.

The ECB didn’t engage with the committee. There was no legal obligation on the Frankfurt regulator to appear, and the committee couldn’t compel it to do so.

Jean-Claude Trichet did agree to answer questions from the audience by committee members at an academic lecture in Kilmainham hosted by the Institute of International and European Affairs. But he later declined to answer follow-up questions.

Although the committee had strong words of criticism for the European Central Bank this week, the failure to secure its co-operation left another significant gap in the inquiry’s work.

The Socialist TD Joe Higgins and Pearse Doherty of Sinn Féin both declined to sign the report. Higgins’s objection was ideological, and he published his own minority report.

Doherty described the report as a series of quotes from senior bankers, politicians and civil servants, without analysis or insight.

The writing of the report turned into something of a farce, with the first draft from the support team described by many committee members as not fit for purpose.

There was then a frantic rush to make it fit for publication in time for the January deadline and with the clock ticking down to an election.

There was then a late stand-off with the developers Michael O’Flynn and Johnny Ronan, who sought changes to the report, claiming they were denied the opportunity to contest some of the testimony given by the National Asset Management Agency.

The pair got their way in the end, and the report was published. But the process of completing and publishing it was far from ideal.