Noonan told ‘bomb would go off’ if bondholders burned 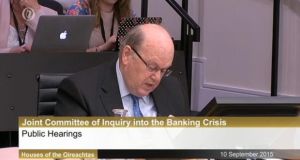 Mr Noonan said he was due to make a speech in the Dáil on March 31st, 2011, to announce bank restructuring when he received a call from Mr Trichet.

He said the former ECB president warned him an economic bomb would go off in Dublin if he pursued the option of imposing losses on senior bondholders.

Mr Noonan said it was reasonably strong pressure from Mr Trichet, who sounded irate during the telephone call.

Taoiseach Enda Kenny also spoke to Mr Trichet but the position did not change.

Mr Noonan said: “I told the Taoiseach the risk was too high and I took burden sharing out of my Dáil speech.”

The Minister said his position is clear burning bondholders would have been better for the economy.

However, after the phone call from Mr Trichet he recognised that was too big a gamble.

He said: “I thought the risk was too high. You have to make decisions like that as Minister.”

Mr Noonan said Mr Trichet’s successor Mario Draghi had a subtlety to find solutions that Mr Trichet did not have.

The Minister said the final cost of the bank bailout will be €30 billion-€35 billion.

Mr Noonan said he is confident the Fine Gael/Labour Government will fully recover the money it invested into the banks and the National Asset Management Agency and the Irish Bank Resolution Corporation will recover a surplus for the exchequer.

He said: “Taking all of the figures together, it is now apparent that the ultimate direct cost of the bank recapitalisations will be the funds invested by the previous Government into Anglo Irish Bank.

“We have taken steps to limit this cost but the final cost, based on the best information available to me at present, will be between €30 billion and €35 billion.”

He said it is important to differentiate between bondholders in Anglo and Irish Nationwide and those in the pillar banks.

Mr Noonan said: “There were other considerations and on weighing up these considerations, the Government took the decision that it was in the best interest of financial stability and of the Irish taxpayer not to pursue burden sharing with senior bondholders in the pillar banks.

“The Government did however pursue with the ECB the proposal to burden share with senior bondholders in IRBC.”

Mr Noonan said the banking crisis has had a profound impact on the country that must never be repeated.

He said the Fine Gael/Labour Government elected in 2011 made a commitment to fix the broken bank system to restore order to the public finances and to regain and enhance the country’s reputation.

Mr Noonan said: “We recognised the growing danger of the State’s debt burden becoming unsustainable and that measures to safeguard debt sustainability needed to be urgently explored.

“The programme of support was already in place, however we decided to renegotiate critical elements of it.

“We succeeded in a number of areas – achieving reduced interest rates, extended maturities, the promissory note arrangement, reversal of the minimum wage, the jobs initiative, and agreement on the use of some proceeds of asset sales for productive investment. We also replaced harmful revenue raising measures with more targeted growth-friendly measures.”

Mr Noonan was questioned about claims by former Irish Bank Resolution Corporation Mike Aynsley that the Department of Finance told one of his executives to accept a lower bid in the sale of a major business, because the higher bid was made from “a named Irish businessperson or his company”.

Mr Aynsley said the department official urged the bank to instead accept a lower bid from a rival bidder, which was €100 million less than the one from the unnamed businessman.

Mr Noonan said he had no idea what Mr Anylsey was talking about and only became aware of it when he read it in the newspaper.

He said: “I don’t agree with the evidence that was given. Nobody has given me a copy of the letter. There is a commission of investigation to deal with this. I can’t help you on this.”

The Minister said there was a lot of exaggeration about the Economic Management Council and claimed it was effectively another Cabinet sub-committee.

“It is not as central to Government as it was.”

The Minister said there was a lot of exaggeration about the Economic Management Council and claimed it was effectively another Cabinet sub-committee.

“It is not as central to Government as it was.”