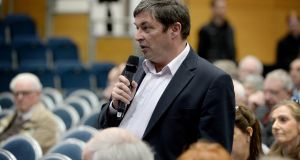 High profile consumer advocate Brendan Burgess has suggested that nobody lost their home as a result of being denied a low-cost tracker mortgage, in spite of data from the Central Bank of Ireland this week suggesting that 99 families lost possession of their houses as a result of the tracker scandal.

Mr Burgess said the reason why the people lost their homes was because they were in “deep negative equity and they were paying nothing”.

According to the Central Bank’s final report on the tracker scandal, following an industry-wide examination dating back to 2015, the average compensation payment to those who lost their family home was €194,000.

Mr Burgess suggested that the 99 families who lost their home were now “hugely” in the money as a result of the “massive” compensation offered under the tracker examination.

“In my view, I wouldn’t have given them the compensation at all,” added Mr Burgess, who runs the website Askaboutmoney. com and has advised people impacted by mortgage arrears and other financial issues since the banking crash in 2008. “I have yet to see anyone who has lost their home as a result of losing their tracker.”

The Central Bank’s report found that 40,100 customer accounts were impacted by the tracker mortgage issues, with the banks paying €683 million between them in compensation.