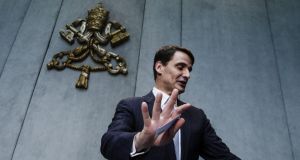 Jean-Baptiste de Franssu, the new president of the Institute for Religious Works, or Vatican Bank, during a press conference in Rome yesterday. Photograph: EPA/Angelo Carconi

It was halfway through yesterday’s presentation of the New Economic Framework For The Holy See when the packed hall of journalists began to laugh. The woman from Corriere Della Sera wanted to know why, among the six new lay members of the board of Vatican Bank, IOR, there was no Italian representative.

Australian Cardinal George Pell, the closest thing the Vatican has to a finance police chief, could have given any number of “smart” answers but he was much too polite.

Even if a small number of Italian crooks, nearly always linked to organised crime, have tended to look on IOR as their own bank, useful for money laundering purposes, Cardinal Pell was quick to say an Italian would shortly be joining the board.

Yesterday was an important day in the Vatican, one which marked another important milestone on the long walk to radical curia and administrative reform conceived by Pope Francis. Cardinal Pell, head of the Vatican’s new economic controlling body the secretariat for the economy, reminded people that at his election last year, Pope Francis had been given a clear mandate to clean up Holy See finances.

Seventeen months later, progress has been made, he added, claiming that the Holy See’s financial situation was “fundamentally sound”. The important thing was for all Vatican departments and institutions to follow the highest “international standards” and not to be involved in financial scandals.

To that end, he said that the powers of the Holy See’s financial watchdog, the AIF, were strengthened last November so that it would be easier for it to detect potential money laundering operations.

Cardinal Pell also indicated that a new committee to propose reforms for the Vatican’s media organisations – Vatican Radio, Vatican TV, the Sala Stampa, Vatican Social Media – had been formed. To be presided over by former British Tory minister Lord Patten, the new committee is expected to come up with a reform package over the next year.

The secretary of the new media team is Irishman Msgr Paul Tighe (56), secretary of the Pontifical Council for Social Communications. From Navan, Co Meath, Msgr Tighe, a former director of the communications office in the Dublin archdiocese under Archbishop Diarmuid Martin, has worked in the Holy See since being appointed to social communications in November 2007. He is known for being among those promoting the idea that Pope Francis should have a Twitter account.

Cardinal Pell also announced that German banker Ernst von Freyberg would be replaced as IOR president by Frenchman Jean-Baptiste de Franssu. Both men attended yesterday’s press conference, with von Freyberg, appointed only in February 2013, quick to claim that he was leaving of his own volition.