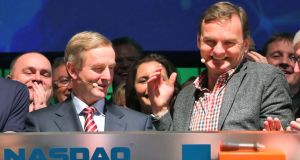 Irish companies will be able to gain dual access to the Irish Stock Exchange’s development market and in the United States on electronic exchange Nasdaq OMX under a deal announced today at Dublin’s web summit.

Officials from both exchanges hope the measure will attract technology and biotechnology firms to consider raising funds in the market.

Bruce Aust, executive vice-president of the global corporate client group at Nasdaq OMX, said Ireland had a “deservedly strong reputation” in the technology sector and believes that the double listing will be a “compelling proposition” to Irish companies in the industry.

“Quotations on both sides of the Atlantic will enable Irish companies to have a high degree of visibility with international investors, particularly global institutions, and re-enforces the connection which already exists between Ireland and the US,” he said.

Market cap
A minimum market capitalisation of €5 million is currently required for companies to list on ESM, though a spokeswoman for the Irish Stock Exchange said the market cap for first-time listings would typically be between €15 million and €20 million.

For companies listing on the Nasdaq, the minimum market value of publicly held shares must be $5 million. However, companies with a lower market capitalisation can still qualify for listing if other sector-specific criteria are fulfilled.

Companies will also be required to adhere to the regulatory environments of both jurisdictions. For Irish companies this would mean being compliant with all applicable regulations set out by the US Securities and Exchange Commission, though this is already the norm for many companies in the sector which are focused on the US market for sales and/or investment.

A spokesman from Nasdaq OMX said that “the listing regime on ISE’s ESM market is aligned with US SEC requirements. This in turn makes it easier and more cost-effective for ESM-listed companies to pursue an IPO on both ESM and Nasdaq and raise capital on both sides of the Atlantic,” he said.

The announcement comes after the Government exempted ESM-listed companies from stamp duty.

1 How long can Government afford to keep State pension age at 66?
2 Guinness brings out a non-alcoholic version of the black stuff
3 Frank Fitzgibbon stepping down as Sunday Times editor
4 How much will a Covid-19 vaccine cost?
5 Farm lobby seeks EU ban on vegan ‘burger’ and veggie ‘sausage’
6 Nest Audio review: A great speaker that also makes your home smart
7 Google's incredible power is the result of decades of regulatory failure
8 Half of businesses plan 2021 pay freeze amid economic uncertainty
9 Budget 2021: fuel prices rise and high-emission cars hit
10 Ulster Bank tells ‘deeply concerned’ Minister no decision yet on future
Real news has value SUBSCRIBE