Most mortgages 90 days in arrears not restructured 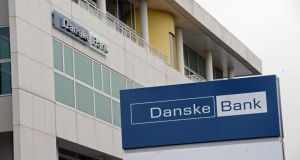 Danske, which has 100,000 personal and 10,000 business customers, is the second bank to announce plans to close this week after ACCBank said it was to hand back its banking licence next year with the loss of about 180 jobs.

Three-quarters of mortgages over three months in arrears at Ireland’s six main lenders have yet to be restructured, figures from the Department of Finance show.

Details of restructurings that have been agreed show that banks remain loath to write off mortgage debt, preferring instead to extend the term of the loan or grant a period of interest-only payments in most cases.

The figures cover 699,764 mortgages at AIB, Bank of Ireland, ACCBank, Permanent TSB, KBC Ireland and Ulster Bank – which between them account for 35 per cent of the homes in the State.

Danske Bank
The details were published as Danske Bank announced plans to close its business and personal banking operations in Ireland with the loss of 150 jobs.

Danske, which has 100,000 personal and 10,000 business customers, is the second bank to announce plans to close this week after ACCBank said it was to hand back its banking licence next year with the loss of about 180 jobs.

Last night, the future of the State’s third largest financial institution – Ulster Bank – was thrown into doubt as a British government report proposed putting the Irish property loans of parent group RBS into an internally managed “bad” bank as part of its plans to resolve its own banking crisis.

An announcement is expected as early as today when RBS reports quarterly figures.

While the vast majority (83 per cent) of the mortgages in the Department of Finance study were performing and not in arrears, 17 per cent or 120,754 were behind in their payments of more than one day.

The department says it hopes the new data, which will be published monthly, will “complement” the Central Bank’s quarterly mortgage arrears resolution targets.

Targets
These targets set out how the regulator expects the six banks in the study to tackle the arrears crisis.

The figures, collated by the department from data provided by the six banks, show that the banks have now entered into restructuring arrangements on a total of 71,086 homes.

Of those, over half or 41,236 have been granted a permanent restructure of their loan while 29,850 have been given a temporary restructure.

The department clarified that not all home loans restructured by the banks were in arrears.

Of those borrowers who had agreed a permanent restructure of their home loan, an extension of the term of the mortgage was the most popular solution agreed. Some 35 per cent of those who had their loan restructured had the term extended.

An interest-only period was agreed with 22 per cent of restructuring homeowners while split mortgages were agreed with just 2,521 mortgage-holders.

The department said the figures are an indication that the banks are “beginning to get their arms around the problem”.

“These figures should give borrowers a sense that there are solutions available,” a spokesman said.

The department says it new monthly figures should show “a switch from temporary to more permanent solutions over time”.

1 Ireland faces 'deep downturn' this year and may not rebound until 2024 if there is a second wave
2 ‘The rental situation stops me moving back home’
3 Why are markets booming when a crash is on the way?
4 John FitzGerald: Civil Service expertise key to Government policy
5 How much do Irish people earn? And what will Covid-19 do to our wages?
6 Red tape logjam creates fear for Irish timber supply
7 Dublin consultancy Pathfinder set for expansion after buyout by Sia Partners
8 Ryanair pilots accept 20% pay cut, airline says
9 Preliminary deal to allow Irish goods travel through UK reached - reports
10 Citi Europe head sees Irish economy among fastest to bounce back
Real news has value SUBSCRIBE