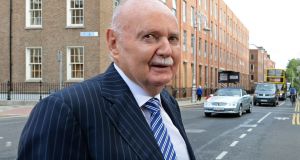 A loan increase of £10 million (€13m) was approved by Irish Nationwide’s chief executive Michael Fingleton and paid to a customer without sufficient backup documentation and without receiving credit committee approval, core documents published by the Oireachtas banking inquiry show.

This was flagged in both a review of lending by Deloitte in May 2008 and an internal audit report in January 2009.

The reports also identify a large number of other weaknesses in the operation of the building society’s credit committee and legal department, along with loose lending practices.

The Deloitte review found that the loan amount to an unnamed customer was increased from £71 million to £81 million with the approval of Mr Fingleton.

“This is in breach of the rules of commercial lending policy as the increased approval can only be given by the credit committee,” Deloitte stated.

In response, the management of Irish Nationwide said that in future all amendments to the original terms of a loan would have credit committee approval before any payout.

Deloitte also noted an instance where the interest rate was manually changed and signed by Mr Fingleton on the loan offer, with no date noted of the change.

“We were informed that the change was made before the client signed the offer,” Deloitte said.

The consulting group also found several instances were there was a discrepancy between the amount of the loan approved by the board or credit committee of Irish Nationwide and the actual loan amount.

“We noted in one case the loan offer of €6.25 million was higher then the credit loan approval of €6 million,” it said.

“We observed in several cases, that the application date on approved Commercial Loan Applications was later than the letter of offer signed by the customer.

“In several instances, we noted that the date of the letter of offer was earlier than credit committee/board approvals, as applicable.”

The internal audit report found that the committee only met five times between July and December 2008 and was not meeting with “enough frequency to fulfil all its duties”.

“In the absence of regular credit committee meetings, loans may be advanced, which were not approved in accordance with the Society’s lending policies,” the report said.

In addition, a loan amount was advanced to refinance existing borrowings that exceeded the credit committee’s approved amount.

“The department has no system for following up on solicitor’s undertakings to ensure its security is correctly registered within a reasonable timeframe,” the audit said.

It also noted that some files were not being stored in a secure location, and that a large number of active legal files containing title deeds were being left in unsecured locations at the close of business each day.

In addition, the legal department has no procedure to compare and verify the signatures of borrowers who had signed solicitor undertakings.

The department did not have any current Law Directory to verify solicitor qualifications and addresses, other than those available to the building society’s solicitors.

The internal audit noted that three legal files did not have any evidence of the undertaking solicitor’s professional indemnity cover prior to the issue of the loan cheque.

And internal audit found that the legal department did not maintain a record of solicitors who had been struck off by the High Court.

The Central Bank of Ireland is currently conducting an inquiry into alleged regulatory breaches at Irish Nationwide, which was nationalised by the State in 2010, having received a €5.4 billion bailout.

Mr Fingleton, who ran the institution from the 1970s until 2009, was controversially paid a €1 million bonus by Irish Nationwide in November 2008, two months after the State’s blanket bank guarantee was issued.