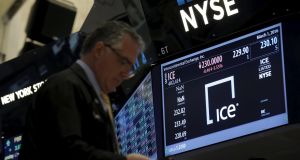 London Stock Exchange Group, which is in talks to merge with Deutsche Boerse to create a pan-European trading house, reported a 31 per cent rise in full-year adjusted pre-tax profit on Friday.

The company, which owns Borsa Italiana and the London Stock Exchange, said discussions with Deutsche Boerse were ongoing over a potential merger which would create substantial revenue and cost benefits.

LSE and Deutsche Boerse said last week they were in merger talks, although New York Stock Exchange owner Intercontinental Exchange has raised the prospect of a bidding war by saying it is considering making a counter-offer. Adjusted pre-tax profit rose to £643.4 million from £491.7 million a year earlier. Revenue rose 78 pe rcent to £2.28 billion.

Analysts had forecast on average full-year pretax profit of £589.01 million . Revenue fell short of forecasts for £2.396 billion , according to Thomson Reuters. The company proposed a higher final dividend of 25.2 pence per share, implying a 20 per cent increase in the dividend for 2015.