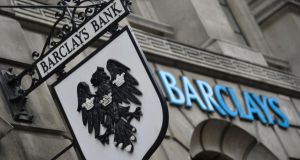 Taking on the regulators is always a risky business, even for a squeaky clean company of good repute. For Barclays, where the misdeeds and scandals just keep coming, it’s a pointless exercise.

For months, Barclays chief executive Antony Jenkins dismissed concerns over the bank’s balance sheet, insisting it did not need to raise new capital. Yesterday, in what has been dubbed the “Mervyn King memorial cash call”, Barclays bowed to the financial authorities and hit its shareholders with a massive £5.8 billion (€6.7 billion) fundraising.

This was far larger than the City had been expecting and Barclays shares tumbled in response, ending the day almost 6 per cent lower. Unveiling the deeply discounted rights issue – needed to plug a £12.8 billion hole in the bank’s balance sheet – Jenkins said the bank had “determined that Barclays should respond quickly and decisively” to meet the regulators’ new targets. The cash call, plus a plan to raise £2 billion in bonds and shrink the balance sheet by up to £80 billion, was “a bold and balanced” move, he said.

Jenkins replaced the disgraced Bob Diamond almost a year ago, in the wake of the Libor rate-fixing scandal, and one of his top priorities was to transform the bank’s reckless, arrogant culture and rebuild its reputation.

Veiled threat
Yet, in comments worthy of his predecessor, Jenkins enraged regulators and politicians last month by issuing a veiled threat that Barclays might cut back on lending to households and small businesses if it were forced to bow to the Bank of England’s demands.

These require banks to have a minimum “leverage ratio” (a measure of capital relative to gross lending) of 3 per cent; in other words, it should hold £3 of capital to support every £100 of lending. At 2.2 per cent, Barclays’ ratio falls well short of that.

A former Bank of England policymaker was so angered by Jenkins’ comments he penned a scathing letter to the Financial Times, accusing Barclays of continuing to sail close to the wind. “Is this the new Barclays?” asked Robert Jenkins, who until recently served on the UK’s new stability regulator, the financial policy committee. Of all the ways that Barclays could choose to reduce its risk – cutting bonuses, retaining more earnings, raising equity or cutting costs – the chief executive had chosen to mention reducing lending. “Was this meant as a threat? Was it hubris, reflex or just plain stupidity?”

Whatever his motivation, reduced lending by the bank is off the agenda now, as it bows to the power of the regulators and plugs its capital gap. Its move was welcomed by the Bank of England, which said it was “a credible plan” that would not require any cutback on lending to the real economy. In a minor victory, the bank has been given until June next year to meet the 3 per cent target.

The scale of the cash call, and the political row behind it, overshadowed the bank’s figures yesterday, but they make grim reading. The scars of the various scandals are plain to see – it has yet again raised the provision for mis-selling financial products to customers, this time by another £2 billion.

Tangled legacy
There is also the tangled legacy of the bank’s last fundraising moves, in 2008, when it turned to Middle East investors to raise cash to avoid a bailout.

Disclosures the bank made then are the subject of investigations by the financial conduct authority (FCA) and serious fraud office. Barclays said it had received the preliminary findings of the FCA, which it was contesting. The FCA has the power to impose financial penalties on Barclays and its executives, four of whom are also under investigation.

Barclays will get its cash call away before the government can sell its bank shares, which will reduce the market’s appetite for stock in the sector and affect the price at which the government can offload its shares. The regulators’ victory may well be the taxpayers’ loss.

1 If tourists are such pariahs should we not be testing them on arrival?
2 ‘My rent here is so low it’s a joke’
3 EU court to rule on the Apple state aid case
4 Indoor vertical farming is the future says Irish agritech start-up
5 Varadkar and Donohoe to meet banks to discuss mortgage breaks
6 Over 2,000 march in Athenry in support of Apple data centre
7 Screen romances can no longer be sealed with a kiss, so what next for TV and film?
8 Family torn apart by father’s enduring power of attorney
9 Digicel warns of Covid-19 hit after first earnings rise in years
10 Quinnbet: the only enterprise Sean Quinn known to have left
Real news has value SUBSCRIBE