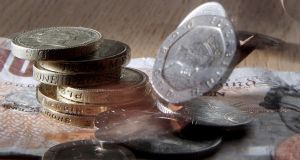 Lloyds is holding a contest among asset managers interested in overseeing the £109 billion. Photograph: Owen Humphreys/PA

Lloyds Banking Group plc is likely to allocate the £109 billion (€125 billion) that it’s pulling from Standard Life Aberdeen plc among several asset managers, a person with knowledge of the matter said.

Hiring a number of firms is seen as less risky though no final decision has been taken, the person said. A spokesman for the bank declined to comment.

Aberdeen secured the coveted mandate when it acquired Scottish Widows Investment Partnership from Lloyds in 2014. The bank chose to terminate the agreement in February after Aberdeen and Standard Life merged, a deal that transformed the company into a direct competitor to the lender’s insurance business.

Standard Life Aberdeen wants to continue managing the money for Lloyds, its biggest client, and has since agreed to sell its insurance unit. A spokeswoman at the fund declined to comment.

Lloyds is holding a contest among asset managers interested in overseeing the money, chief executive Antonio Horta-Osorio said at a press conference in February. The funds will be available to manage when the contract expires in June 2019. – Bloomberg

1 Coronavirus: Construction sector most significant part of new shutdown
2 Volkswagen burning through €2bn in cash per week
3 British exceptionalism backfires in style as Johnson tests positive for coronavirus
4 Wetherspoon’s panto-villain chairman may have the last laugh
5 Rivian takes on Tesla with big batteries and subtler approach
6 Denis O’Brien’s Digicel asks creditors to write off some of its $6.8bn debt
7 Can husband keep savings and half the house in divorce?
8 Mobile, broadband suppliers to be given extra radio spectrum
9 UK needs to be honest about its Covid-19 strategy
10 NordicTrack S22i Studio Cycle: An expensive way to cut down on the cabin fever
Real news has value SUBSCRIBE