Irish man Colm Kelleher to step down from Morgan Stanley 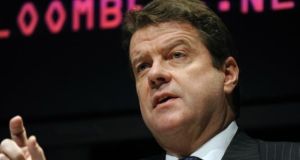 Colm Kelleher: will remain a senior adviser to Morgan Stanley

Irish man Colm Kelleher, the second-most-senior executive at Morgan Stanley, is retiring at the end of June, setting the scene for a lengthy contest between his lieutenants to succeed him as president and position themselves to be the bank’s next chief executive.

Morgan Stanley announced the departure of the 61-year-old – one of the City of London’s most prominent figures during his previous posting leading Morgan Stanley in Europe, the Middle East and Africa – after markets closed on Thursday.

The Wall Street bank had not appointed a successor and might wait more than a year to do so, one person familiar with the bank’s plans said, adding that the position was a fluid one that had variously been vacant, held by one person or held by co-presidents.

While Mr Kelleher, who is a year older than chief executive James Gorman, always insisted he had no designs on the top job, whoever holds the role next would become Mr Gorman’s heir apparent, a second person familiar with the bank’s plans said.

“James will have a chance to have all of these people report directly to him. He’ll get a chance to work with them and have a better perspective [on succession],” the person added.

“There is plenty of talent at the firm. And as James is only 60, there’s plenty of time for that,” said Guy Moszkowski, analyst at Autonomous, adding that while Mr Kelleher was “an important contributor” to Morgan Stanley, his departure was not a surprise.

In a memo to staff, Mr Gorman paid tribute to Mr Kelleher for helping restore the bank’s fortunes after the financial crisis and described him as “the most important person I have sought advice from”.

“At the same time his sharp mind, wicked humour and Irish charm sets him apart in the world of all-too-often-dull business leaders,” Mr Gorman added.

“Colm is seen by colleagues and competitors alike as having a powerful intellect and fierce competitive streak. He is and will remain a close friend to many of us, and I am extremely grateful to have been able to call him my partner.”

As head of the investment bank, Mr Kelleher oversaw a landmark restructuring of Morgan Stanley’s fixed-income business in 2015, when the bank axed 1,200 staff at its fixed-income division, including one in four traders, so the unit would be “critically and credibly sized for the current market”.

The decision has served Morgan Stanley well. Its fixed-income division has prospered over time, while rival Goldman Sachs has been punished for its failure to take similarly decisive action and is now considering cuts under David Solomon, its new chief executive.

Mr Kelleher often hinted that he and Mr Gorman would retire together. A person familiar with Mr Gorman’s thinking said that the Australian had “no plans to retire”.

Mr Kelleher, whose brother Declan is Ireland’s ambassador to the EU, has been particularly outspoken on Brexit, penning an opinion article for The Irish Times where he warned that a hard Brexit “has the surreal feel of opposing sides holding the same hostage, both threatening to tear up the pan-European asset that is the City of London”.

The banker has told friends his immediate plans include spending the month of July in rural Cork, travelling in Europe with his wife in August, going to his house in Italy for September and spending October walking the Camino de Santiago in Spain in honour of his parents.

He will remain a senior adviser to Morgan Stanley, where his youngest son works as an equity analyst.