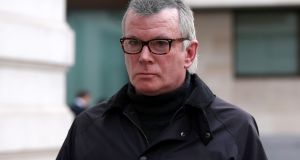 A second former Barclays banker has been convicted of conspiring to manipulate global Euribor interest rates, taking to nine the number of people found guilty in six rate-rigging trials.

The jury of nine men and three women on Thursday found Colin Bermingham, a 62-year-old veteran banker, guilty by a majority verdict after a two-month re-trial brought by the UK Serious Fraud Office (SFO) at Southwark Crown Court.

Bermingham, the last of three former Barclays bankers to hear his verdict in the case, bowed his head in the dock and his supporters gasped in shock in the public gallery. Just hours before, the jury had been in deadlock.

Co-defendant Carlo Palombo, a 40-year-old Anglo-Italian former derivatives trader, was convicted by a majority verdict on Tuesday while Sisse Bohart, a 41-year-old Dane, was acquitted. She was not in court to hear her verdict.

Mr Bermingham and Palombo will be sentenced next Monday.

In the glass-surrounded dock, a composed Mr Bermingham had placed a comforting hand on Palombo’s back when the former trader-turned-academic, visibly shaken, turned to gaze at his distraught, heavily-pregnant wife in the public gallery after he heard his verdict earlier this week.

Mr Bermingham, Mr Palombo and Ms Bohart were tried twice after a previous jury was unable to reach a verdict in their case last July.

Eleven powerful banks and brokerages have been fined a total of $9 billion to settle rate-rigging allegations in a global investigation. Barclays paid a $453 million penalty in 2012, sparking a backlash that forced out former chief executive Bob Diamond.

The defendants denied a charge that they had conspired to dishonestly manipulate Euribor (the euro interbank offered rate) - a benchmark that helps determine rates on more than $150 trillion of global financial contracts and loans - between 2005 and 2009.

Prosecutors alleged that bankers tilted the odds in their favour for profit, tweaking rates to gain a dishonest trading advantage, deliberately ignoring rules that rates should be set independently of commercial interests and prejudicing the economic interest of others.

The jury was told that two French bankers, former Barclays colleague Philippe Moryoussef and Christian Bittar, a one-time Deutsche Bank star trader, had already been convicted over the conspiracy.

Mr Bittar, once one of the world’s best-paid traders, pleaded guilty ahead of last year’s trial, at which a jury convicted Mr Moryoussef. But he was tried in absentia and remains in France after fleeing when Mr Bittar’s plea was made public.

The jury was asked whether Mr Palombo, who joined Barclays as a graduate trainee and reported to Mr Moryoussef, Ms Bohart, a junior trader and rate submitter and her boss, 38-year Barclays veteran Mr Bermingham, had been knowingly involved in the same conspiracy.

They said they had followed instructions and learned on the job, had acted openly, believed there was a range of equally justifiable rates, that taking account of a bank’s commercial interest was common market practice - and that Euribor rates accounted for an insignificant part of their jobs.

The verdicts represent a mixed result for the UK taxpayer-funded SFO in a complex case. The agency’s original plans to prosecute 11 individuals were hampered when Germany and France refused to extradite five.

Brussels-based Euribor, like its Libor (London interbank offered rate) counterpart, is designed to reflect the cost of borrowing between banks and is set after submitters at a panel of major banks report their estimated costs of borrowing over various periods to an administrator, who calculates an average.

In six benchmark rate-rigging trials to date, 10 have been acquitted. – Reuters