IBOA says staff may have to act as debt collectors 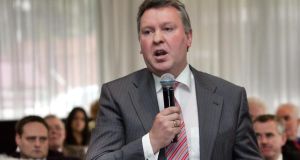 Irish Bank Officials’ Association general secretary Larry Broderick: “We don’t want to see our members being put in a position where there are sent out to act as debt collectors.” Photograph: Matt Kavanagh

The largest banking union has said its members are unhappy at the prospect of being turned into debt collectors by the Central Bank’s revised code of conduct on arrears, which will give banks new powers to pursue borrowers struggling to pay their loans.

Under the rules to be published last week bank staff will for the first time be allowed to make unsolicited house calls to borrowers in arrears. However the union representing thousands of bank officials has said it has “huge reservations” about this clause being added to the code.

‘Distressed’
The head of the Irish Bank Officials’ Association, Larry Broderick, told The Irish Times that many of those in arrears “are seriously distressed” and there was “potential they would take their frustrations out on ordinary bank officials if they called to their homes. We don’t want to see our members being put in a position where there are sent out to act as debt collectors.”

He also criticised the banks for providing staff with little or no training in how to deal with distressed borrowers, and said the mortgage crisis was putting bank officials in positions they were ill-equipped to deal with.

Under the code a current 12-month moratorium on legal action which protects homeowners vulnerable to repossession is to be removed and any house owner who leaves the mortgage arrears resolution process will have two months before legal action can be taken against them. It also reduces the protection to homeowners from excessive contact from banks. While existing rules stipulate lenders can only contact borrowers three times a month, this has been dropped for “proportionate” contact.

“The changes are going to lead to bullying, harassment and intimidation by the banks,” said David Hall of the Irish Mortgage Holders Association. He said that if the code of conduct published by the Central Bank on Thursday is the same as the draft proposals which are already in the public domain “it will amount to an act of treason from a statutory body which is charged with protecting consumers” .

‘Power imbalance’
The new code will allow banks to speed up repossessions if they want to “or to do as they see fit”, warned Noeline Blackwell of the Free Legal Advice Centre . “The power imbalance between lenders and borrowers has increased rather than diminished.”