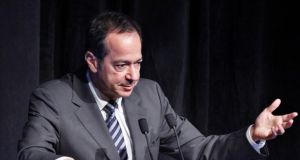 John Paulson, the hedge fund manager famed for betting against US housing in 2007, has made the largest ever donation to Harvard University, giving $400 million to expand its school of engineering and applied sciences.

The Ivy League university, from whose business school Mr Paulson graduated in 1980, is building a new engineering school campus next to the business school in the Allston area of Boston. It will be renamed in his honour.

Mr Paulson joins a parade of the financial industry’s richest figures making donations to their alma maters, but he rejected criticism his gift perpetuates inequality by endowing money on an elite university.

“I don’t come from an elite background,” he said. “I went to public schools in New York City. I went to Harvard on a scholarship and I am very grateful for the financial support that I got. The money is going to be used largely for financial aid and scholarships; I know how expensive it is to go to university.”

The School of Engineering and Applied Sciences offers Harvard’s most popular course: an introduction to computer science. It has also done pioneering work in robotics, developing robots that can assemble themselves and what it calls a “swarm of self-organising robots”.