Outstanding amount on notes maturing on Tuesday was $95 million 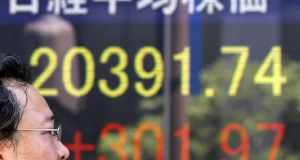 The Greek government repaid Samurai notes maturing on Tuesday, according to bond agent Mizuho Bank, in a first sign the nation is honouring its obligations after reaching a deal with creditors.

Masako Shiono, a spokeswoman for Mizuho, confirmed the repayment. The outstanding amount was 11.67 billion yen ($95 million).

Greece chose to pay private investors while missing a further payment to the International Monetary Fund due on Monday, increasing arrears to the global lender of last resort to about €2 billion ($2.2 billion).

While the IMF will wait to get its money back, institutional investors wouldn’t, and a default on the Samurai bond would have complicated the repayment schedule, according to Daiwa Securities Group.

“Everybody would ask for their debt to be repaid, in an accelerated process.”