Good cause to celebrate as Ireland Funds turns 40 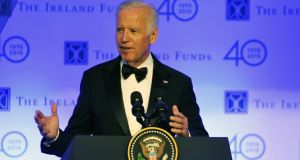 The Ireland Funds celebrates its 40th birthday this year. The brainchild of Irish businessman Sir Anthony O’Reilly and American entrepreneur and former ambassador to Ireland Dan Rooney, it all began with a dinner in the Waldorf Astoria hotel in New York on May 26th, 1976.

It was far from a roaring success by all accounts and the joke now is that the only reason another dinner was held in 1977 was to pay the bills for the first one.

In the early days, the fund sought to provide a conduit through which the benevolence of “well-meaning Irish Americans could contribute to the building of peace in Ireland”, according to Maurice Hayes, a former funds chairman.

Today, its mission is to be the largest network of “friends of Ireland dedicated to supporting programmes of peace and reconciliation, arts and culture, education, and community development throughout the island of Ireland”.

Generating funds from the US remains integral to its work, but the funds has now established chapters in 12 countries and the business community in Ireland contributes more now than in the past.

In spite of its slow start, the charity has steadily gained momentum, raising more than $540 million to date for various projects north and south of the Border. More than 3,000 organisations have provided donations.

Its “Promising Ireland” campaign, which was launched in 2009 to assist the economy here in the wake of the global financial crash, raised an impressive €226 million in six years, more than double its original target.

A little under two weeks ago, I attended its 40th bash in a marquee in Trinity College, where US vice-president Joe Biden was the guest of honour and Sir James Galway provided the entertainment, along with a few ropey jokes.

It was the day of the Brexit result and Taoiseach Enda Kenny jokingly threatened to give a two-hour lecture on the implications for Ireland as he began his folksy address. It helped to break the ice on a day when most in the room were left reeling by the referendum result and questions abounded about the likely shape of the future relationship between Ireland and Britain outside the EU, and the possible reinstatement of Border posts between North and South.

Rooney’s pieces extends to just four paragraphs and highlights how the funds had to “overcome the stigma of money for guns”, against the backdrop of the Troubles in Northern Ireland.

“At first, many people thought we were just another group trying to get guns to fight the peace effort, but we carried on and the idea for peace came to the fore. We were for peace and we were going to stay with it,” Rooney states.

O’Reilly’s piece runs to almost five pages and is mostly a commentary on the social and political history of Ireland through the centuries, providing a context for partition and the Troubles.

He believes that the funds helped to lay the groundwork for the peace process.

“We will not achieve our goals of peace, culture and charity in our lifetimes but we will have passed to future generations our vision of a truly noble and inspiring Ireland,” O’Reilly states in rather sobering terms. “We must continue.”

O’Reilly’s piece notes that there were many “sceptics” about the work of the funds when it was started out. That continues to be the case, although it’s now less about “money for guns” and more about the scandals that have afflicted the wider charity sector in Ireland in the past couple of years, as evidenced recently by the revelations involving Paul Kelly and the suicide bereavement charity, Console.

There is also cynicism more generally around big business blowing its own trumpet at lavish parties about its generosity to the less well off.

It’s a shame because with Chuck Feeney’s Atlantic Philanthropies winding down its activities here and the Government still strapped for cash, good causes on the island need the likes of the Ireland Funds now more than ever.