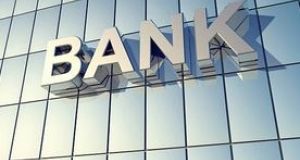 The results from the banks have blow the starting whistle on the US earnings season. Photograph: Getty Images

Banks led a slide in US stocks on Friday, as results from big lenders including JP Morgan Chase failed to enthuse investors.

Shares of the biggest US bank by assets dropped 2.6 per cent, overturning an initial gain in hypermarket trading when the bank reported a record quarterly profit that fell slightly short of expectations.

Wells Fargo sank 3.1 per cent, also erasing initial gains, after the bank said it may have to pay a penalty of $1 billion to resolve investigations.

Citigroup also fell around 2.5 per cent as Citigroup reported a higher-than-expected quarterly profit, driven by strength in its consumer banking business and a surge in equities trading. Global consumer banking revenue increased 7 per cent on gains in North America, Mexico and Asia. Equity markets revenue jumped 38 per cent, gaining from increased volatility in the quarter. But weakness in the lender’s investment banking business was a sore point for investors, reporting a 10 per cent drop in revenue.

Larger rival JP Morgan Chase’s quarterly profit was also dented by a 7 per cent decline in investment banking revenue despite posting a 35 per cent rise in overall net income to a record $8.7 billion (€7bn). Net interest income was up 10 per cent to $13.3 billion, showing the benefits of keeping deposit rates low while charging more for loans. Non-interest revenue was up 13 per cent to $14.6 billion, in a display of the bank’s pricing power.

The bank noted that its first-quarter results included $505 million of pretax mark-to-market gains connected to the adoption of a new way of accounting for equity investments previously held at cost. The benefit came to 11 cent per share. The record quarterly net income meant that the bank made about $100 million in profit for shareholders every single day.

Total revenue in the quarter fell 1.4 per cent to $21.93 billion. Total loans slipped 1.2 per cent to $947.3 billion, hurt most by a decline in average loans in its community banking unit, which includes consumer banking.

The bank results blow the starting whistle on the US earnings season. – Reuters